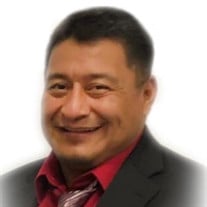 On Sunday, March 21, 2021, Adrian Paul Olague (Kimosabi), loving father of five children, passed away at age 51 due to complications associated with COVID. Adrian was born August 29, 1969, in Ogden, UT, to Vincent and Virginia (Gonzales) Olague. Adrian married Cynthia Schrogham in June 1988, and later divorced in 2009. Adrian raised his three sons Christopher, Dallin, Cyrus and two daughters, Briana and Jessica. Adrian enjoyed driving “Big Trucks” (Commercial) for the family business in Cache Valley, UT. His lifelong dream was to run the business with his brother and carry on the legacy established by his mother and father. Adrian was a dreamer with a creative mind and talented hands. He loved to build things or fix them, which inspired him to learn welding and diesel mechanics. Adrian designed and built equipment to improve safe handling of equipment, and anything to make their jobs easier. Adrian’s greatest joy was spending time with all his children, and watching his son Cyrus play Basketball. Adrian realized something was missing from his life, so he started searching and later found the LDS church and was baptized. He brought the spirit into his life to help his family grow together and improve their lives. Through manifestation of the spirit, he knew his children would be safe and when this day came that he would part, he had planted a seed and knew they would be together again. Adrian was a kind-hearted and loving father and made new friends wherever he traveled. Adrian will be missed by all of us who love him and the many, many friends he touched. We will miss his witty personality, his infectious smile, and his kind and compassionate spirit. Adrian was preceded in death by his mother, Virginia, and his son, Christopher. He is survived by his father, Vincent Olague (Blanca), his two sons, Dallin and Cyrus, his two daughters, Briana Edge (Angela) and Jessica Olague (Dustin), his brother, Vince Olague, his sisters Belinda Pierce (Quinn), Tina Mace (Brett), Donna Garza (Scott), Michelle Olague, his daughter-in-law Nancy and twelve grandchildren. A viewing will be held Thursday, March 25 from 6 p.m. to 8 p.m. at Allen-Hall Mortuary, 34 E Center Street, Logan, Utah, and again on Friday, March 26 from 9:30 a.m. to 10:30 a.m. with funeral services following at 11 a.m. Interment will take place at the Clearfield City Cemetery where he will be laid to rest with his son and mother. Brother Scott Jenson will perform the grave dedication.

The family of Adrian Paul Olague created this Life Tributes page to make it easy to share your memories.

Send flowers to the Olague family.