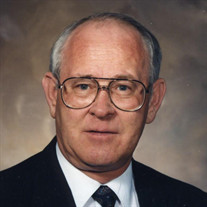 Alfred Lawrence (Buddy, Bud) Pace III was born Nov 8, 1936 in Provo, Utah, to Alfred L. Pace Jr., and Phyllis D. Thorsen. He passed away on July 29, 2020 in Logan, Utah at the age of 83. He was blessed with four brothers and six sisters: Carol (Paul Bird), JoAnn (Elwin Stapley), Jim (Carrol Anne Hervey), Sherrie (Steve Sumsion), Allen (Cathy Bismark), Elayne (Lee Mackey), Gary, Susan, Terry, and LaWana (David Applegate). He married Loraine Tolman on May 31,1963, in the Salt Lake Temple. They have six children: Lawrence (Shauna Chappell), Elese (Wayne Elwood), Michele (Gordon Willey), William (Tracey Franklin), Andrew (Jennifer Griffiths), and Wendell (Heather Mitchell), 22 grandchildren and 7 great-grandchildren. He was educated in the Provo City schools and LDS Seminary. He completed his Bachelor’s and Master’s degrees at Brigham Young University, and PhD degree at Washington State University. He resided in Provo, Bountiful, and Logan, Utah; Pocatello, Paul, and Jerome, Idaho; Pullman and Yakima, Washington; and Ramat Rachel Kibbitz and BYU Jerusalem Center in Israel. Bud and Loraine loved ball-room dancing together. His profession was 40 years with the LDS Church Education System at six Seminaries and six Institutes of Religion in Utah, Idaho and Washington, culminating at the Logan Institute of Religion adjacent to Utah State University. In 40 years he took only one sick-leave day. He received the “Distinguished Teacher Award” from the Church Education Northwest Inland Division. He was a director of Seminaries and Institutes in Idaho, Oregon, and Washington; advisor of the LDS Student Association, Sigma Gamma Chi chapters and Institute Men’s Association. His military career consisted of three years as an Air Force ROTC cadet at Brigham Young University and seven years in the Idaho and Utah Army Reserves and National Guard—being honorably discharged with the rank of Staff Sergeant. He thought serving in the Armed Forces of America was one of the greatest experiences of his life. He was devoutly active in The Church of Jesus Christ of Latter-day Saints all of his life, much of it in leadership roles with boys: Scoutmaster twice, Explorer Post Adviser, and Ward and Stake Young Men’s President twice at each. He served as Elders Quorum President, Bishop’s counselor twice, a Bishop twice, High Councilor four times, in the Yakima Washington Stake Presidency, and a Patriarch in the Logan Utah Central Stake. His full-time mission took place in the Southern States. He was an ordinance worker in temples in Utah and Idaho over 60 years. He was actively registered with the Boy Scouts of America for 52 years in five councils: Utah National Parks, Tendoy, Fort Simcoe, Cache Valley, and Trapper Trails, his latest service being as Council Commissioner. He was awarded the Eagle Scout Rank with six palms and 70 merit badges, Explorer Scout Bronze Award, Varsity Scout Letter, Distinguished Commissioner Award, District Award of Merit, Youth and Duty to God Awards, Deseret Recognition Award, Master M-Man Award, BSA Doctor of Commissioner Science Degree, and was a recipient of the Silver Beaver Award. He completed Scouter training at the Philmont Scout Ranch, and all of the basic BSA training programs which were offered. He was a delegate on the National BSA Council. His four sons, his two sons-in-law, and seven grandsons are Eagle Scouts. Loraine and Bud were faculty directors with their children in Europe and twice in the BYU Jerusalem Center, and have been tour directors in Israel, Syria, Jordan, Egypt, Europe, British Isles, Scandinavia, China, Hawaii, Australia, New Zealand, Mexico, and American History and Church History sites. In 1987, they took their children on an 8,000-mile car trip of the United States from coast to coast. Loving the out-of-doors, Bud climbed Mount Timpanogos 23 times on the annual hikes. He cruised the Provo, Snake, and Colorado Rivers (the latter three times for 177 miles each time on the water). Hiked across the Grand Canyon in 1962. Camped with 80 BYU students twice in the Sinai Peninsula, snorkeling in the Red Sea at sites from the Gulf of Aqaba to the tip of the Sinai Peninsula. He was a spelunker (cave explorer) in several areas. One of his most exhilarating feats was climbing to the top of the Great Cheops Pyramid of Giza, Egypt three times. Bud had a great love for the God of Abraham, Isaac, and Jacob all of his life. He knew that Jesus Christ was his Savior and Redeemer and cherished his association with Him. His family was his greatest blessing, his country of America a cherished dream. He was grateful to have the name of the Messiah upon himself through baptism and eternal covenants. His love and knowledge of the scriptures was exceptional. There will be no public viewing or service. He will be buried in the East Lawn Memorial Cemetery, in Provo, Utah.

Alfred Lawrence (Buddy, Bud) Pace III was born Nov 8, 1936 in Provo, Utah, to Alfred L. Pace Jr., and Phyllis D. Thorsen. He passed away on July 29, 2020 in Logan, Utah at the age of 83. He was blessed with four brothers and six sisters: Carol... View Obituary & Service Information

The family of Alfred "Buddy"/"Bud" Lawrence Pace III created this Life Tributes page to make it easy to share your memories.

Send flowers to the Pace family.