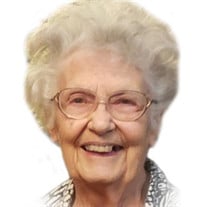 Alice Joy Seamons Cardon, age 94, of Benson, Utah, passed away Saturday, July 11, 2020. She grew up in Hyde Park, Utah, and was the last remaining child of Joseph Elijah Seamons and Lucy Jackson Seamons. She graduated from North Cache High School and married her high school sweetheart, Kenneth Roundy Cardon, on September 22, 1944, in the Logan Temple. They celebrated their 75th wedding anniversary last September surrounded by their family. They lived in Benson, Utah, their entire married life, where they raised their six children and numerous animals on the family farm. Alice spent several years as a 4H Club leader helping to form a sewing club for young girls. She served as secretary, vice president and president of the Cache County Chapter of the Utah Dairy Wives and was active in the Dairy Princess Pageant for many years. During this time, she was instrumental in preparing, publishing, and selling a book of recipes that use dairy products, to help raise funds for that organization. She was also selected as the editor for over five years for The Newsette, a monthly newsletter containing current community news which was sent all over the world to support and strengthen the many men and women in the mission fields and in military service. She compiled and wrote a history of Benson entitled, This Is Benson: Cache County, Utah, It's History and People, that was published in 1982. Alice served on the Cache County Fair Board and as head of the Home Arts and Sewing Department at the Fair, working under the direction of the Farm Bureau Women's Committee. She also filled an assignment to work on a special committee to study and evaluate the Logan Regional Hospital Management. She was an officer in the Utah Association of Conservation Districts Auxiliary organizations, attending state and national conventions representing Utah. She helped initiate and promote a scholarship fund at Utah State University to provide scholarships to worthy individuals pursuing a career in Agriculture, helping in many fund-raising activities both in the state and the nation. In her spare time, she was a census taker and a voting judge during election years. Alice and Kenneth, who grew up during the Great Depression, grew a family garden every year. They were able to help those in need throughout their community, with home bottled fruits and vegetables, which they canned as a family. Alice was a member of the Church of Jesus Christ of Latter-Day Saints. She served faithfully in a number of callings including Relief Society President, various capacities in Young Women’s, and in many Primary callings for the Benson, UT Ward. She and her husband Kenneth served three missions for the Church. They lovingly served in the Connecticut Hartford Mission, the Manila Philippines Temple Mission, and their final mission at the reconstructed Illinois Nauvoo Temple Mission. They also served as Temple Officiators in the Logan Temple for more than 15 years. Alice and Kenneth lived lives of service. From making and selling greeting cards to supply the Benson Church kitchen, to hand-written notes of love and encouragement, they leave behind them their legacy of faith in serving others. Alice loved spending time with her family; everything from family dinners, playing card games, and visiting while putting puzzles together, to arguing over words in Boggle. She taught the importance of family to many generations. She was a genealogy enthusiast, and spent many hours searching records looking for her ancestors. Alice is survived by her husband, Kenneth Roundy Cardon of Benson, Utah (96) and her children Sidney (Nancy) Salem, UT; Joy (Mike) Reyes, Logan, UT; Marlin (Akemi) St. George, UT; Gaye (Vic) Lee, St. George, UT; Allan (Jan) Benson, UT; and Kent (Karen) Amalga, UT; as well as 23 grandchildren, 54 great-grandchildren and 10 (soon to be 12) great great-grandchildren. She is preceded in death by her parents; brothers Norman, Kenneth, Corlette (Freddy); and sisters Genevieve (Jenny), Daisy, and Josie Mae. Due to Covid-19 no public viewing will be held. In lieu of flowers Alice had requested donations be made to The Church of Jesus Christ of Latter-day Saints Missionary Fund in her honor. Graveside services will be held Friday, July 17 at 11am in the Logan City Cemetery 1000 N 1200 E, Logan, UT 84321. Masks and social distancing are required.

The family of Alice Cardon created this Life Tributes page to make it easy to share your memories.

Send flowers to the Cardon family.