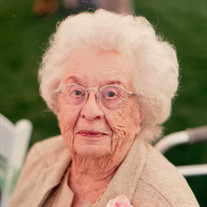 Our sweet mother, Alice Bateman Nelson, passed away peacefully surrounded by her family on Friday, August 13, 2021, in Bountiful, Utah. She was known for her kind and gentle nature and always looked for opportunities to serve her family and friends. She was the second child of eight children, born January 3, 1921 in Kanab, Utah to Edward Allen Bateman and Orrel Emma Greenwood. She lived a full and happy life of 100 plus years. After graduation from Logan High School, she attended Utah State University where she met her husband, Dale. They were married September 19, 1941 in the Salt Lake Temple. Together they spent most of their married life in Logan, Utah where they raised their family. In addition to being a wonderful mother, she was an accomplished secretary and spent many years working at Utah State University in the Controller’s Office, the President’s Office and eventually secretary to the Provost. She was valued for her excellent office and organizational skills. She was a woman of many talents. Her attitude was, “I can make that,” whether it was a piece of clothing, an oil painting, a recipe, or anything sewn or stitched with a needle. We often heard the hum of her sewing machine in the early hours of the morning and a joyful whistle as she worked around the house. She handcrafted many beautiful quilts, as well as meticulously embroidered pieces and cross-stitched treasures that were given to her children and grandchildren. She loved to play Bridge, and was always up for a game of “ghetto Scrabble” with her grandkids. During their retirement, she and Dale enjoyed traveling, camping and visiting children and grandchildren, supporting them in their many activities. A faithful member of The Church of Jesus Christ of Latter-day Saints, she served in many callings which included a mission with Dale in the Mexico Chihuahua Mission as well as serving as an ordinance worker in the Logan Temple. Alice is survived by her five children, Vicki (Larry, deceased) Obray, of Harrisville, UT, Patricia (Cordell) Fonnesbeck of Casper, WY, Julie (Jeff) Jorgensen of Helper, UT, Jerry (Pam) Nelson of Ogden, UT, and Lori (Darren) Hedin of Centerville, UT. She is survived by twenty-five grandchildren, fifty great grandchildren and four great, great grandchildren with more to come. Of her eight siblings there are three surviving sisters, Jean Hull, Mesa, AZ, Janet (Max) Manwaring and Kay Spjut of Salt Lake City, UT, and a brother-in-law, Thomas Geary of Albion, ID along with many nieces, nephews and extended family. She was preceded in death by her husband, Dale, her parents, three sisters, one brother, a son-in-law and two grandsons as well as several brothers and sisters in law. On Saturday, August 21, 2021, friends can meet the family from 12:00 - 12:45 PM, at Allen-Hall Mortuary in Logan, Utah after which the family will hold a short memorial service prior to interment in the Logan City Cemetery. Services may be viewed live by going to www.allenmortuaries.com at 1:00 pm. Click on the following link to livestream the funeral: https://us02web.zoom.us/j/85250110901?pwd=dmJMZmFuVHRkQmhvcnl1UTA4RVg2QT09 password: Nelson

Our sweet mother, Alice Bateman Nelson, passed away peacefully surrounded by her family on Friday, August 13, 2021, in Bountiful, Utah. She was known for her kind and gentle nature and always looked for opportunities to serve her family and... View Obituary & Service Information

The family of Alice Bateman Nelson created this Life Tributes page to make it easy to share your memories.