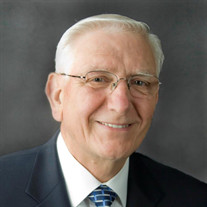 On March 5th, an uncommonly good man left his Logan home to continue his explorations of the heavens. Allan Joseph Steed was born August 6, 1937 to T. Joseph and Louise Miller Steed. He often expressed gratitude for the loving family and good friends who blessed his early years in Syracuse, Utah. Growing up on a dairy farm, he learned hard work and persistence. He was a natural athlete and excelled in many sports, including tennis and basketball. He graduated from Davis High and served in the Central States Mission of the Church of Jesus Christ of Latter Day Saints. In 1961, he married his beloved Carolyn Kaye Taylor in the Logan Temple. They created a happy home for each other and their four children. Above all else, he was an extraordinary husband, father, and grandfather. Allan loved learning. He earned his BS, MA, and PhD in electrical engineering from Utah State University. While pursuing his Master’s Degree, he began working at the Elecro-dynamics Laboratories (EDL), where he dedicated tremendous time and energy to studying upper atmospheric phenomena around the world. Allan became director of EDL in 1978 and was instrumental in the creation of the Space Dynamics Lab at USU, where he became the director in 1982 and led the lab until his retirement in 2003. It was a rewarding career that allowed him to associate with many great coworkers as well as state, national, and global leaders. Allan endeavored to be a disciple of Christ, serving in various church callings including High Councilor, Scoutmaster, Stake Presidency Counselor, Temple Worker, and Bishop of two wards. He and Kaye enjoyed their full time Church Education System Mission in Austin, Texas. When he wasn’t working or serving, Allan enjoyed spending time outdoors camping, hiking, fishing, and stargazing. He loved spending time with Kaye at their Bear Lake cabin. Regardless of where he was, he always carried a camera to capture nature’s beauty. Allan played basketball into his 70’s, and as a devoted Utah Jazz fan, rarely missed a game on TV. In his later years, Allan faced several health challenges with grace and strength, and the family would like to thank his many medical providers, especially Dr. Michael Stones, Dr. Ed Redd, Dr. Patrik Luzny, and Teryl Hunsaker. Allan was preceded in death by his parents; siblings, Eloise (Kowallis), Grant, Carolyn, and Richard, son-in-law Paul Cazier (Leesa). He is survived by his wife Kaye; his siblings, Sharon, Steven, and Helen (Ed Smedley); his children and their spouses: Leesa (Daniel Simmons), Jana (Randall Haws), Clark (Kari), and Brian (Leslie); fifteen grandchildren, and nine great-grandchildren. Funeral services are under the direction of Allen-Hall Mortuary and are scheduled for Saturday, March 13, 2021, at 11:00 a.m. Interment will be in the Logan Cemetery, where Allan requested that we play a favorite song, Aaron Copland’s Fanfare for the Common Man. To remember and honor Allan, donations may be made to the Allan & Kaye Steed Scholarship Endowment at Utah State University (http://usu.edu/steed). The scholarship benefits students who are pursuing a degree related to space engineering. A recording of the services may be viewed via the following link: https://youtu.be/dLrQclsMLJ8

On March 5th, an uncommonly good man left his Logan home to continue his explorations of the heavens. Allan Joseph Steed was born August 6, 1937 to T. Joseph and Louise Miller Steed. He often expressed gratitude for the loving family and good... View Obituary & Service Information

A recording of the service may be viewed via the following link: https://youtu.be/dLrQclsMLJ8

On March 5th, an uncommonly good man left his Logan home to continue...

Send flowers to the Steed family.