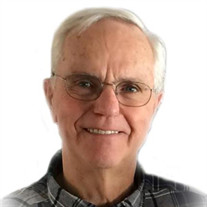 Join Zoom Meeting https://us02web.zoom.us/j/86467703197 Early in the morning of July 19th 2020, The Old Indian Allen Morris Sorenson (age 76) won the battle with Alzheimer’s disease and took a JEEP ride into paradise probably by way of Flat Top. He was born on February 2nd 1944 (Groundhog’s Day) to Gaylard and LaFaye Larson Sorenson in the Logan Hospital. He lived in Smithfield, Utah his entire life. He graduated from North Cache High School and later received his Bachelor’s degree and Masters of Education from Utah State University. He lived with, taught, and loved the Native American people while serving in the Northern Indian Mission (Montana, North & South Dakota and Wyoming.) for the Church of Jesus Christ of Latter-Day Saints. Upon returning from his mission in 1965, he met and fell in love with the cute girl next door Linda Schvaneveldt. They were married in the Logan Temple on June 17, 1966. He taught seminary for 30 years at Logan High, Sky View High, Mountain Crest High, North Cache and South Cache Jr. High Schools and was lovingly known by his students as “BS” or “Bro Sor”. In addition to teaching he was a licensed building contractor, a tree farmer, gold miner, deer feeder, truck finder extraordinaire, chimney sweep, Hospice Chaplin and an excellent butt kicker. Not many could smash ants better than him! He knew every road in Southern Idaho, Western Wyoming, Northern Utah and all of the farmers in between. Anyone who knows him, knows that he loved the mountains. He enjoyed Jeeping, hunting, camping, 4 wheeling, and snowmobiling. You could often find him drinking a Coke while enjoying the view of Flat Top. His legacy is carried on by his wife Linda, and their four children Sherry Hall (Smithfield, Utah), Paul and JaNae Sorenson (Smithfield, Utah), Mark Sorenson (South Salt Lake City, Utah), Scott and Tammy Sorenson (Hyde Park, Utah). He is Grandpa to Kade and Abbie Godderidge, Corbin and Lindsey Hall, Lindee Hall, Jake, Cody, Julisha, Talon Sorenson, Cole, Kali, Bailey, Gage and Laike Sorenson; and one great grandson Tate Godderidge. He is also survived by his brothers, R. Brent and Jeanette Sorenson, (Layton, Utah), Ralph G. and Beth Sorenson, (Smithfied, Utah), and his sister Marilyn and Roger Douglas,(Smithfield, Utah). As a faithful lifelong member of the Church of Jesus Christ of Latter-day Saints, he had a strong testimony of his Savior Jesus Christ, and of eternal families. He had a caring and service oriented heart. His sense of humor drew people to him and allowed him to touch many lives. Once you met him, you had a life-long friend. The family would like to thank CNS Hopsice and Autumn Care for their loving care of Allen during his last three months. Funeral services are under the direction of Allen-Hall Mortuary and will be held on Tuesday July 21, 2020 at 12:00. Due to current circumstances, the funeral will be for family only but will be live streamed for the public. A drive by viewing will be held that morning from 9:00 a.m. to 11:00 a.m. at the church building located at 640 N 200 E, Smithfield, Utah. Burial will be in the Smithfield cemetery. Condolences may be expressed online at www.allenmortuaries.net

The family of Allen Morris Sorenson created this Life Tributes page to make it easy to share your memories.

Send flowers to the Sorenson family.