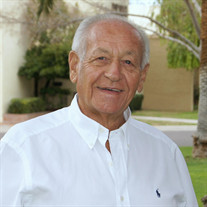 Alva Norris Smith, Jr. passed away on June 16, 2020 from prostate cancer. Alva was born in Paradise, Utah on December 20, 1937 to his parents Alva Norris Smith Sr and Eva (Summers) Smith. Eva passed when he was only 6 months old. Alva was then blessed to be raised by his additional wonderful mothers; Aunt Lavella (Summers) Gibbs, Aunt Estell (Summers) Scott, and Step Mother Doris (Sjostrom) Obray Smith McBride whom he dearly loved and spoke of often. Alva graduated from South Cache High School in 1956. He completed six months of Army active duty training in October 1957, after which he was called to serve a mission in the West Central States Mission and entered the MTC in Salt Lake City on January 20, 1958. After his mission in 1960, he married his sweetheart, Jalaine (Snelgrove) Hoover, from Smithfield. Together they had six children: Kevin (Analisa), Kenny, Kristine (Lynn) Syddall, Cleon (Amy), Robyn (Colby) Hunter, and Kyle (Jocelynn). He and Jalaine later divorced. Alva worked at Wangsgard’s Heating and Appliance in Logan working in sales and as an AR Clerk. He worked at E.A. Miller & Sons in Hyrum as a payroll clerk. Alva’s ambition was to be a salesman and have his own business. The next 40 years he lived his dream of being self-employed. He had a bridal registry business “Personal Progress” in which he sold cookware, crystal and fine china. He was a co-owner of the Cache Nickle for several years. He also ran a successful cleaning business “Execu-Care” in Phoenix, AZ for 27 years where his slogan was “We’ll Make You Look Good”. He was very meticulous. He loved his job, and the people he worked with were like family to him. He retired in 2013 and shortly after returned home to Cache Valley. Alva had a giving heart and enjoyed serving others. We are grateful for his influence and the traits he passed on to his children and grandchildren such as his love of gardening, throwing eloquent parties, a strong work ethic, integrity, and always loving and accepting of others. He had a talent for writing poetry and decorating the most beautiful Christmas trees. He loved Cache Valley and being in the nearby canyons, especially East Canyon. This is where he spent many hours with his dad, fishing near Porcupine Reservoir. He also loved his Arizona weather during the cold winter months of Cache Valley. Alva was a sharp dressed man who enjoyed traveling, musicals and stage plays, and watching his grandchildren in their sporting events and activities. Most of all he enjoyed creating special memories with his family when they came to visit him in Arizona. He was preceded in death by his parents Alva Norris Smith Sr, Eva (Summers) Smith and Step Mother Doris (Sjostrom) Obray Smith McBride, stepsister Deanne (Obray) Willis, grand children David Jessop & Kaden Smith along with his many special mothers and their children whom were like siblings to him Ray, Clark, Grant Gibbs, Gretta (Gibbs) Hansen and Rosalyn Amerman. Alva is survived by his 6 children, 29 grandchildren, 35 great-grandchildren, 3 great-great-grandchildren, and his stepbrother Golden Obray. The family wishes to thank all those that have been so supportive and loving at this tender time. A special thanks to the wonderful staff and nurses that cared for him at Sunshine Terrace. The family will be celebrating his life on Father’s Day to honor his legacy. There will be a Graveside Service at a future date. Burial will be at the Paradise Cemetery. Services are under the direction of Allen-Hall Mortuary and condolences may be shared with the family at www.allenmortuaries.com.

Alva Norris Smith, Jr. passed away on June 16, 2020 from prostate cancer. Alva was born in Paradise, Utah on December 20, 1937 to his parents Alva Norris Smith Sr and Eva (Summers) Smith. Eva passed when he was only 6 months old. Alva was... View Obituary & Service Information

The family of Alva Norris Smith Jr. created this Life Tributes page to make it easy to share your memories.