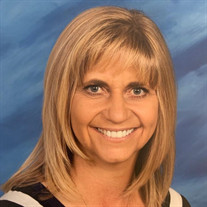 Our beautiful wife, mom and grandma; Andrea passed away peacefully in her home in Logan, Utah on September 10, 2020 after a very courageous, hard-fought 3 1/2 year battle with cancer. Andrea was born on September 4, 1966 to her proud parents, Mack and Lona Tueller. She was born in Sacramento, CA but moved to Smithfield, UT when she was five years old. After graduating from Sky View High School in 1984 she worked at Cache Valley Dairy. After many years of raising her children as a stay at home mom, she went back to work in the fall of 2006 at Logan High School. She worked at Logan High up until just a few weeks ago. She knew her health was not good enough to keep working and was saddened to leave all of her life long friends she had met in her 15 years of working there!! On October 24, 1986 she married her eternal companion, Bud Connor, in the Logan Temple of the Church of Jesus Christ of Latter-Day Saints. Together they were the very proud parents of 5 children which they raised in Logan, Utah. Andrea was a devoted wife, mother and grandmother to 11 beautiful grandchildren. Her family is what made her the happiest, especially her grandchildren. As long as everyone was together she was happy, this included all of the time spent with her extended family!! She was a faithful member of the Church of Jesus Christ of Latter-Day Saints and held numerous callings over the years, her favorite being working with the Young Women. In March 2017 she was diagnosed with Bladder cancer. This is when her inspirational fight of this disease began. During her 3 1/2 year battle, she remained a fun, positive light to all of those that were around her. During the many ups and downs she never complained. She was treated by amazing doctors at the Huntsman Cancer Institute. She became close to her doctors and a lot of her nurses whom she loved and adored! Her life advice to her family was “be kind, just be so nice!” Which is exactly the legacy she left us all to remember. She was always nice and kind to anyone she met! Andrea is survived by her husband; Bud Connor, father; Mack Tueller and step-mother Maurine, siblings; Zonna (Bob) Christley, Brad (Leslie) Tueller, Lanell (Wade) Ferguson, Norman (SueZan) Tueller, Dave (Stephanie) Tueller, Doug (Lisa) Tueller, Kevin (Ana) Tueller, children Justin Connor, Kendra (Josh) Stead, Jordan (Stephanie) Connor, Karley (Kyle) Gardiner, Jaden Connor and 11 grandkids; Jaxon, Kylar, Kynlee, Maeli, Kambri, Beckham, Oaklee, Blakely, Kaizley, Isla and Jett. Andrea was proceeded in death by her mother Lona Tueller, brother; Robert, mother in law; Sandy Hollingsworth, sister in law; LaRee Tueller and her grandparents. The Connor family sends their appreciation to Dr. Gupta and Dr. Tenzin and their staff at the Huntsman Cancer Institute. There will be a viewing Thursday September 17th from 6:00-8:00 pm at Allen-Hall Mortuary. (34 East Center Street, Logan, UT). Graveside services will be held Friday, September 18, 2020 at 11:00 am in the Logan City Cemetery, 1000 North 1200 East, Logan, Utah. Masks and Social distancing are encouraged. Folding chairs or blankets to sit on and water are recommended. The funeral service will also be streamed via zoom, by clicking here: https://us02web.zoom.us/j/88168680392 In lieu of flowers, donations can be made to the Huntsman Cancer Research Institute in her honor.

Our beautiful wife, mom and grandma; Andrea passed away peacefully in her home in Logan, Utah on September 10, 2020 after a very courageous, hard-fought 3 1/2 year battle with cancer. Andrea was born on September 4, 1966 to her proud parents,... View Obituary & Service Information

Our beautiful wife, mom and grandma; Andrea passed away peacefully...

Send flowers to the Connor family.