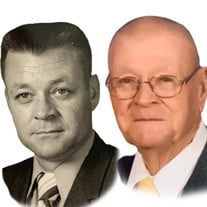 Arden F. Draney passed away peacefully on March 30, 2022 surrounded by family. He was born on March 12, 1935 in Star Valley, Wyoming to Jesse and Ruby Foss Draney. Arden attended Star Valley High School in Afton, Wyoming and graduated in 1953. He then attended Utah State University while working at Kennecott Copper Mine in the summertime. He graduated from Utah State University with a bachelor’s degree. Arden was an avid Aggie fan and was a yearly season ticket holder. He met Dawn Baker in Salt Lake City, Utah and they were married September 20, 1958. They moved to Cache Valley where they were blessed with two daughters and then later divorced. Arden married Joan Vance Eames on January 23, 1993. They lived life to the fullest, snow skiing and traveling the world together. Arden and Joan were later sealed in the Logan Temple. In 1962, he started working for Thiokol where he enjoyed his career with the aerospace company. He worked for 35 years, and upon retirement loved outdoor activities, especially working on the ranch. Arden was a kind and generous man and a wonderful cook. He loved to take his children and grandchildren horseback riding and boating. He had many fond memories of boating on Hyrum Dam with his family and friends and was an exceptional water skier. He also enjoyed taking the “ark”, the boat his brother Elno built, to Porcupine Dam to fish for kokanee salmon. He also had a love for gardening and truly had a green thumb. He loved sharing the fruits of his labors with everyone. Irrigating was one of his favorite things to do, and if you weren’t going to take your water turn, he would happily use it for you. Arden was a member of The Church of Jesus Christ of Latter-day Saints. He served faithfully in many callings. He loved his association with members of the Providence 6th Ward. Arden is survived by his wife Joan, his two daughters Tyla (Brian) Darley , Tennly (Dallan) Maughan and Joan’s children; Randy Eames, Debbie (Bret) Liechty and Shelly (Mitch) Hedin and a bunch of well-loved grandchildren. He was preceded in death by his parents and siblings, Elno, Ivin, Doyle, Jack, Eva, Mable, Opal and Randy’s wife Tamara. Funeral arrangements are under the direction of Allen-Hall Mortuary with a viewing at the mortuary 34 E. Center Street in Logan on Tuesday April 5, 2022 from 6:00 to 8:00 p.m. The funeral will be held at the Providence 6th ward chapel, 262 Canyon Road in Providence on Wednesday April 6, 2022 at noon, with a viewing before from 10:30 to 11:30. Interment will take place in the Providence Cemetery. Condolences may be expressed at www.allenmortuaries.net

The family of Arden Foss Draney created this Life Tributes page to make it easy to share your memories.

Send flowers to the Draney family.