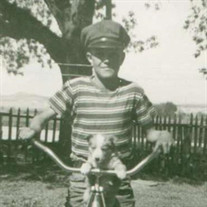 Arlen Sparks Dahle passed away on the beautiful night of the blue moon of Oct 30. Arlen was born on Sept 11, 1931 to Newell Christensen Dahle and Olive Bethea Sparks in Clarkston, Utah. He was the 5th child in a family of six children. He was the last living member of his family. His oldest brother VaNon was in an accident where he lost his eyesight. Dad quit school after eighth grade to help on the family turkey farm. This was just the beginning of his hard work ethic. Dad first saw mom getting off the bus in Newton as he was driving through town Soon after he found time to meet this gal. They started dating. Several months later he was drafted, and off he went. Dad came home on furlough and married Gwennie LaWana Goodsell on July 26, 1952. Their marriage was solemnize in the Logan Temple on Feb 7, 1963. They are the parents of 4 children: Keith Arlen (deceased) Debra Nielsen Anderson (deceased), Kimberly Jensen (Chris) River Heights, and Cindy Crockett, Logan; 15 grandchildren and 17 great-grand children. He was preceded in death by his parents, 4 brothers, 1 sister, 2 children, 3 grandchildren, and 1 great granddaughter. After returning home from Korea, dad pestered LeGrand Johnson long enough he gave him his job. He worked for Johnsons for 31 years before he had to take medical retirement. Several neighbors are recipients of his wonderful cement work. Its not easy to define dad in a short article. He taught us so many valuable lessons starting at a young age: anything worth doing is worth doing well; leave things better than you found them; you always have to think about tomorrow and the list goes on. Dad loved music, but his garden was his pride and joy, which he continued through this year. There were not enough neighbors to share all the squash, and tomotoes his garden produced. His corn was delectable. He developed a system of planting corn that lasted through the entire season. Dad and mom spent 12 winters between Yuma and Havasu Arizona. They have a great love for the lasting friendships they made there The family would like to thank the many doctors and nurses who have cared for him. But mostly, thank you mom for being the best nurse anyone could ask for. She always said she wanted to keep dad at home, and she did. In dads words, "My wife was my angel." Funeral services will be Wednesday November 4 at 11:00 am. at the Allen-Hall Mortuary, 34 East Center Street, Logan, with a viewing prior from 9:30 - 10:30am. Interment will take place in the Clarkston City Cemetery. Services may be livestreamed at https://us02web.zoom.us/j/89739938638?pwd=aFNENDRBV0RGL1c2SkpYcC82VEhDQT09 Password: Dahle

Arlen Sparks Dahle passed away on the beautiful night of the blue moon of Oct 30. Arlen was born on Sept 11, 1931 to Newell Christensen Dahle and Olive Bethea Sparks in Clarkston, Utah. He was the 5th child in a family of six children. He... View Obituary & Service Information

Arlen Sparks Dahle passed away on the beautiful night of the...

Send flowers to the Dahle family.