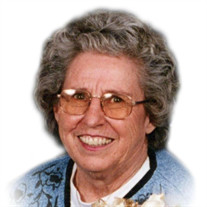 Arlene Beck Younker passed away from age related complications on January 10, 2021 in Logan Utah. She was born in North Logan on April 3, 1932 to Irma King and Albert Beck. She joins her husband, Donald Lee Younker, who passed away two months ago in November, 2020. They were sealed in the Logan Temple and had been married for almost 70 years. Despite having cancer and other health problems she cared for Don up until a few days before his death. In addition to Don, she was preceded in death by her parents and her daughter in law, Diane Younker (Gordon). She is survived by her brothers; Lyle Beck (Dessa) and Philip (Bonnie) ; her sister, Esther Richardson (Ron), her children ; Gordon (Marie), Norman(Kathy), Douglas (Vicki), Marcene, Angela (Rocky Mackin) and Ranell (Butch Johnson); and 14 grandchildren and 17 great grandchildren. Arlene and Don grew up on adjacent farms on the foothills bordering the Cache National Forest. She spoke fondly and often of the difficult years on the farm and of her love of the mountains and of nature. Although the valedictorian of her high school class, she was content to live as a wife and a mother. She taught her children to cook, to sew and to harvest and preserve produce from a large garden . She loved reading and learning. Some of her children’s earliest memories are of sitting next to her reading. She excelled at sewing, making school clothes , sometimes out of flour sacks when money was tight. She was devoted to Don, and followed him to the East coast when he served in the Navy during the Korean War. She always said “I was this small town farm girl living in a big East Coast city”. Following the War she went with Don to Tulelake California where they lived in a shed covered with tarpaper while working a 100 acre homestead. In 1960 they returned to North Logan where they built a home between the farms on which they had been raised. In mid and later life she loved and dedicated herself to her grand children and great grandchildren, many of whom grew up on the family farm next to her and Don. She and Don received national recognition for their work with the U. S. Forest Service to help conserve and preserve the mountains they loved . She was a faithful and lifelong member of the Church of Jesus Christ of Latter Day Saints. She helped shape the lives of countless youth and received the Silver Beaver award for her service with the Boy Scouts. She had unwavering faith in and love for her Family, her Religion and her Country. A memorial service will be held at 12:00 Noon on Friday, January 15 at the LDS Chapel located at 2600 North 1600 East. A family viewing will be held in the Relief Society Room between 11:30 and Noon. Following the service, interment will take place at the North Logan Cemetery. Masks and social distancing are required. Condolences may be expressed and services viewed by going to www.allenmortuaries.com. Services will be livestreamed and may be viewed via the following link: https://us02web.zoom.us/j/86153078759?pwd=ejFsR3NIL1U2dXZ4RHNJS3pydEloQT09 Password: Younker

Arlene Beck Younker passed away from age related complications on January 10, 2021 in Logan Utah. She was born in North Logan on April 3, 1932 to Irma King and Albert Beck. She joins her husband, Donald Lee Younker, who passed away two months... View Obituary & Service Information

Send flowers to the Younker family.