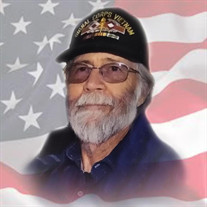 Born on January 1st, 1943 to loving parents Arlo Matkin Bodily and Glenda Smart, in Fairview Idaho. Glen was born in a maternity home in Fairview Idaho as his dad postponed his entry into WWII to be home for his birth before leaving for active duty in Germany. His dad was injured in a tank explosion during the Battle of the Bulge. They lived on a dry farm in Fairview Idaho until he was 12 years old, the family moved to Lewiston Utah in the home where he lived until he left to marry and had two children, Kelly (Terry), and Teresa. They later divorced. He was drafted into the Army and then enlisted so he could go to school to become a communication specialist. He was sent to VietNam in January 1968, spending the next year in Nha Trang. Returning home in January of 1969, fulfilling his duty to God and Country. He moved to Denver in May of 1969 and went to work at Samsonite Luggage factory. Easily making friends, he was asked if he would like to meet a young woman for a blind date. He accepted the offer at which time, May 29, 1969, he met his wife to be, and her friend, and took them both on a picnic to City Park in Denver. After a fairly long chase he caught her, and married her on August 14th, 1971. Together they had two children, son Troy, and daughter Cindy. In 1980 they returned to Logan to raise their family in a friendlier, safer environment. A short time after arriving they bought their family home where there was much love, joy, laughter and tears throughout the years. Gaining two amazing grandsons, Matkin 1997, and T.J. 1999 bringing untold joy to our home and lives. Adding more joy was the marriage of Matkin to Hannah 4 years ago, with the blessing of beautiful twin girls, Poppy and Lilly, making us Great Grandparents.. Two years later T.J. met the love of his life, Taylor and blessed us once again with another beautiful baby girl, Elizabeth. After a long 11 year hard fought battle with cancer caused by Agent Orange in Viet Nam, he was released from his pain on May 27, 2021 surrounded by his family and loved ones, just one month after returning from his beloved winter home in Mohave Valley Ariz(ona, where we had spent the last four winters. He was preceded in death by both his parents, all grandparents and several other family members whom he loved. He is survived by his wife, Vickie, his children, Troy (Marci), Cindy (Todd) Holland, grandsons Matkin USN,(Hannah), Troy "TJ" (Taiylor) great granddaughters Poppy, Lilly, and Elizabeth, adopted daughter Lisa (Brendan) Gonzalez, lifetime friend, Darrell Bailey (Julie). Siblings, Brent (Linda), Carolyn (Sherwood) Preece, Chris. Eleven nieces and nephews, Aunt Norma Bodily and Uncle David Smart (MaryAnn), many cousins and extended family. We would like to express our love and gratitude to Fizz and Carla Bodily for all their love and support especially during Glen's last few days. Funeral services provided by Allen Hall Mortuary, 34 E.Center St. Logan, Ut. Viewing will be held from 6 - 8 p.m on Wednesday evening at the mortuary, and from 10 a.m to 11, followed by the funeral services, at the Stuart Park Ward, 565 E. 100 S. Logan, UT. Luncheon provided by the Stuart Park Ward Relief Society immediately after the services. Internment will be at the Fairview Cemetery in Fairview Idaho following the luncheon. Condolences may be expressed online at www.allenmortuaries.net

Born on January 1st, 1943 to loving parents Arlo Matkin Bodily and Glenda Smart, in Fairview Idaho. Glen was born in a maternity home in Fairview Idaho as his dad postponed his entry into WWII to be home for his birth before leaving for active... View Obituary & Service Information

The family of Glen Bodily created this Life Tributes page to make it easy to share your memories.

Send flowers to the Bodily family.