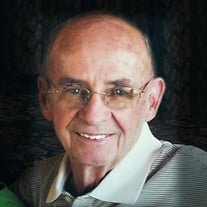 Arthur Clair Obray, 86, passed away in Farmington, Utah on February 8, 2022. Clair was born in Paradise, Utah on February 1, 1936 to Clifford Orgill and Jean McCann Obray. He was the 4th of seven children in the Obray family. Clair attended Paradise Elementary School from Kindergarten through 8th grade. He then attended and graduated from South Cache High School in 1954. Growing up in Paradise Clair loved playing rubber guns, fishing, hunting and horseback riding. He loved baseball and played on the high school team as well as Paradise’s city team for several years. He was a left-handed first baseman and was selected to participate in the All-Star games three years running in the Cache Valley Baseball league. Clair was introduced to his sweetheart, Eloise Leishman, by his older brother Ron. Clair and Eloise were married 3 years later on September 20, 1956 in the Logan LDS Temple. Clair and Eloise wanted desperately to have children. After 6 years they were blessed to be able to adopt their first son, Greg, when he was 6 days old. They were then able to have their son Paul 15 months later followed by their son, Mark, and their daughter, Julie. Family has been so important to Clair and Eloise throughout their lives. Clair was such a good son and brother in his early years and this continued as he became the parent to 4 children of his own. Clair was known to share many facts about the places they drove through as they took road trips to visit their cousins in California each summer. He had an answer for everything! Clair transitioned into the best grandpa that any kid could hope for. Clair’s grandchildren will forever remember the hikes at Tony Grove, camping at Bear Lake, vacationing in Hawaii as well as trips to St. George. Clair was a surveyor for UDOT for 32 years before taking an early retirement and starting a new career with Morton International for an additional 10 years. When Clair wasn’t working at his job, he was working manicuring his yard and gardens. The Obray yard was always well kept with many varieties of plants and flowers. If Clair wasn’t working in his own home or yard, he was probably helping one of his neighbors with a little project or helping one of his children with a household task. Clair was a member of the Church of Jesus Christ of Latter-Day Saints. He was the best Home Teacher you could ever hope for. Clair also served in many Bishoprics and Presidencies throughout his years. Clair is survived by his wife, Eloise; his children Paul (Lori), Mark and Julie and his grandchildren Kylie, Kaden (Haylee), Tanner (Taylor), Jaxon, Addison and Dillon. Clair is also survived by his sisters Patricia Balls and Colleen (Vernon) Ryan. Clair was preceded in death by his son Greg Obray, and his siblings Reid Obray, Lois Ricks, Ron Obray and Larry Obray. Our family would like to thank all of the special people at Covington Senior Living Center for the thoughtfulness, love and care they have given Clair, Eloise and our entire family. We are so grateful that Clair was taken care of by such loving people. Funeral Services will be held at Allen-Hall Mortuary, 34 East Center Street in Logan, Utah on Saturday, February 12th with a viewing from 10:00 – 11:30 and the funeral service beginning at 12:00 in the mortuary chapel. Interment will be in the Providence Cemetery. The funeral services will be livestreamed and can be accessed by clicking on the following link: https://us02web.zoom.us/j/86833483807?pwd=K2Nhd0VPZmMzQS93QW8vNHltWCtrUT09 (password: obray)

Arthur Clair Obray, 86, passed away in Farmington, Utah on February 8, 2022. Clair was born in Paradise, Utah on February 1, 1936 to Clifford Orgill and Jean McCann Obray. He was the 4th of seven children in the Obray family. Clair attended... View Obituary & Service Information

Arthur Clair Obray, 86, passed away in Farmington, Utah on February...

Send flowers to the Obray family.