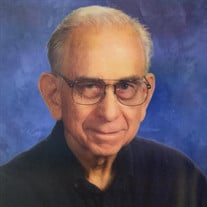 On July 8, 1931 in Los Angeles California Julia Alice Inman (Judy) and Stewart Payne Rivers (Joe) became the parents of their only child, Arthur Lorenzo Rivers. Art spent the next 20 years in California, graduating from Harvard Military High School in 1949 then 2 years at Pepperdine College. With the start of the Korean War, Art decided to join the Air Force, which took him to Germany, North Africa and Spokane Washington. While in Spokane, Art found the Church of Jesus Christ of Latter day Saints, which was a very important part of the rest of his life. After finishing his military career as an x-ray technician, Art Moved to Logan Utah to attend Utah Agriculture College, where he earned a masters degree in Agriculture. Most importantly, he met his love Pearl Olsen. They married July 17, 1959 in the Logan Utah Temple. After graduation, Art and Pearl set off on an adventure that lasted 47 years. They went to Penn State to study the effects of nuclear radiation. Paul and Mike joined the family in Nevada, Grace joined in Washington State, Susan in Colorado and Rebecca back in Utah. Art returned with his family to Utah State University to earn another Masters degree in Instructional Media. Then they were off to Wyoming for Art to be a librarian first in Casper then to Riverton on the Wind River Reservation, a short time spent in Nampa Idaho ended when Art’s father in law, Delno Olsen, called and asked them to come back to College Ward, Utah to help out. The family spent the next 15 years in College Ward while Art worked at USU in the water lab as a draftsman. After retirement Art and Pearl moved to Guam where he again worked as a librarian. After his second retirement they returned to Logan. Art was not content to sit still and found the Foster Grandparent Program, which allowed him to tutor elementary age children in reading. Many remember him as Mr. Art or Grandpa Art from Hillcrest, Woodruff and Wilson schools. Helping teach children to read became his third career that lasted more than 15 years and brought him great joy. Grandpa was a family photographer with an emphasis in landscape and developing his own photos. In later life he enjoyed art, painting, reading, and long conversations in between naps. After Pearl’s death in 2006, Art found love again, with another Foster Grand Parent, Gwen Hansen. They married in 2008 in the Ogden Utah temple and spent 2 happy years together until her death in 2010. Gwen’s family stayed near and dear in Art’s heart. Art is preceded in death by his parents, grandparents, Pearl and Gwen. Art was one of the last of his generation to pass on. Left on Earth to miss Art are his Children: Paul(Elisa), Michael(Ting), Grace, Susan(Wade) and Rebecca(Ross), 14 grandchildren, 10 great grand children, many friends and foster grandchildren. He will be fondly remembered for his hugs, snores, thunderous sneezes, dry humor and practical approach to editing. Arthur Lorenzo Rivers died peacefully, surrounded by loved ones, on April 13, 2021 in Logan Utah. Art’s funeral was held on April 16, 2021 at the Logan River 5th Ward building. His internment followed at the Logan City Cemetery. Military honors were provided by the South Cache American Legion. We will treasure our time with you.

The family of Arthur Lorenzo Rivers created this Life Tributes page to make it easy to share your memories.

Send flowers to the Rivers family.