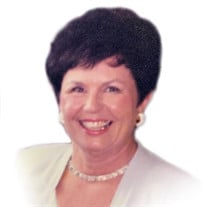 Barbra Ann Schaub Pingree passed away peacefully Monday, February 21, 2022. She was 86 years old. “Babs” was born September 7, 1935, to George Wesley and Ida (Kern) Schaub in Logan, Utah. She was proceeded in death by her mother Ida (Kern) Schaub, her father Wesley Schaub, sisters Karen Rae Schaub and Karma Schaub Nelson. She had four sons; Dale Scott (Karen) Pingree, James Wesley (Roxanne) Pingree, Jed Schaub (Linda) Pingree, David Conrad (Gretchen) Pingree, who gave Babs and Hal 19 grandchildren, 17 great grandchildren & 1 great-great grandchild. Babs graduated from Logan High School. While attending Utah State University she was married to her high school sweetheart Dale Hal Pingree in the Logan LDS temple on June 20, 1956. Promptly after, they left for Valdosta, Georgia where Hal was stationed as a Cadet Fighter Pilot for the U.S. Airforce. After rounding out their military service time on Cape Cod, Babs returned home to Logan to finish her degree and earned a Bachelor of Arts in Childhood Education. Out of college, Dale took a job as a Boeing Engineer which moved the couple to Seattle, Washington where they lived for 55 years. Shortly after moving, Hal took a position as an Airline Pilot with West Coast Airlines and Babs began working as a substitute teacher. She was immediately offered a full-time teaching contract which she accepted, teaching Kindergarten for many years. Her love of teaching lead her to develop her own curriculum and open a private pre-school which she owned and operated until she retired in 1995. She no longer operated the pre-school, but she never stopped teaching everyone she knew. She taught by example, with compassion, and love. Babs and Hal taught children and flew airplanes until their retirement in the mid 1990’s. Babs raised her four boys in Bellevue, Washington. She spent more hours than most at athletic events. She loved to watch her boys play sports and she loved the social aspect of the teams. Babs was active with the PTA, she served as President of the Booster club and was involved with many other service organizations and efforts. Most of her service was given as an active member of the Church of Jesus Christ of Latter-Day Saints where she is known for her leadership roles in the Stake and Ward Relief Society, Young Women, Seminary and Primary. Babs had dear friends from grade school, high school, Utah State, from their military years, from all her boys’ sports teams, from the Bellevue Ward and beyond. Everyone claims Babs as their 2nd mother, another grandma, their best friend or her favorite. She shined a special light wherever she went and with everyone she touched. In 2016, Babs and Hal returned home to Logan, Utah to live out the rest of their years enjoying family and friends. Babs made everyone feel special. She was known for her flair for decorating, her darling style and passion for fabulous shoes. She is more well known for her unending love and devotion to her family, her calling as a teacher and caretaker of all of those she loved. She was the best example we have of Christ-like service and pure love. Services will be held Saturday, February 26, 2022. The viewing will be from 9:30-10:30 a.m., the funeral at 11 a.m. at the Allen Mortuary of North Logan: 420 East 1800 North, Logan, UT. Interment will be immediately after at 2:00 p.m. at the Ogden Cemetery: 1875 Monroe Blvd. Ogden, UT. Condolences and memories may be shared online with the family at www.allenmortuaries.net.

The family of Barbra Ann Schaub Pingree created this Life Tributes page to make it easy to share your memories.

Send flowers to the Pingree family.