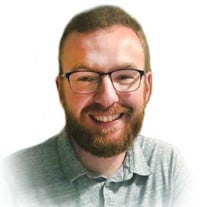 We are deeply saddened to announce the passing of our beloved son, brother and friend Benjamin Brad Baker, age 24, on May 10, 2021. Benjamin was born July 5, 1996. He was a happy baby and adorable toddler, walking around with binkie in mouth and “blankie” in hand. He was known for his “Ben Snuggles”, which we treasured. He was a happy go-lucky kid, always hyper. He would be told to “go run around the house 10 times”, only to come back with no visible energy depleted. He was a source of joy and delight. The house was often filled with childhood friends, quickly depleting our supply of milk, cereal and ramen. He spent summers camping with cousins, aunts, and uncles who were so dear to him. Nearly all his birthdays were celebrated at “Keller Camp” in Logan Canyon over the 4th of July weekend. Ben had a gifted mind. He was a great student and extremely smart. He had an uncanny ability to recite any line or quote from a show, movie, or song that he had seen, even just once. He was great at memorizing comedy shows like Brian Regan or Jim Gaffigan and reciting them when his family needed a laugh. We joke that he was better at performing the shows than the original comedians. Ben never told a short story in his life. He was committed to making sure no detail went overlooked. He was a regular for family game night. He was incredibly competitive and the family scorekeeper. Family game night will never be the same. Ben was a dedicated fan of the Utah Jazz. We hope they can win a championship in his honor! Ben graduated from Davis High School in 2014. He played the baritone in the Davis High Marching band and proudly marched in the Rose Bowl Parade during his senior year. He had an interest in medical sciences and obtained his EMT certification. Upon return from his mission, he enrolled at Brigham Young University. At the time of his passing, he was employed at Sprout furniture manufacturing. Ben served as a missionary for The Church of Jesus Christ of Latter-Day Saints in the Taiwan Taichung Mission, speaking Mandarin Chinese. One of his missionary companions said that Ben was more fluent in Mandarin than most of the missionaries he knew. He retained that fluency after his return home, working at NuSkin. Ben loved the Taiwanese culture and was looking forward to returning to the country. His greatest complaint upon returning to the states was that the pineapple here just did not live up to the fruit he experienced in Taiwan. Ben had a strong testimony of the Gospel and his Savior, Jesus Christ. He was a beautiful example of Christianity throughout his life, always caring, always kind, full of love and compassion for those around him. We nearly lost Ben in December 2020 as he battled complications of Covid-19. We are so grateful to the medical caregivers who gave us more time to spend with him. Ben was an incredible uncle to his nephew Kyle and niece Maisey. They both love him dearly. He was “Uncle Ben” and lived up to that role in every way he could – playing airplane, changing diapers, cuddling, rough-housing and many other ways. They knew he was a special spirit and that he cared about them deeply. Even at a young age, Maisey formed a bond with her Uncle Ben and would smile and talk to him. Benjamin is survived by his parents, Brad and Shawna, brothers Daniel and Jonathan, sister Bethany and her husband Travis, and their children, Kyle and Maisey. He is also survived by grandparents Regene Israelsen, Dean and Robyn Baker, and Ruth Ann Durrant. He has a large extended family, who love him and will miss him dearly. He has many dedicated and close friends who are also grieving his loss. Michael Kunzler became Ben's first friend, at age 3. They were inseparable growing up and Ben loved him as a brother. We know he was greeted in Heaven by his grandfather, Dee Butler Israelsen, with whom he had a special bond. We are comforted at the thought of Ben wrapped in his warm embrace. Ben, there are no words that can truly express our love for you, and our sorrow for your struggles. We pray that you are happy and at peace. You will live in our hearts forever, until we meet again. We express our deep gratitude to all for their love and support. We love you, and we know Ben loved you as well. Ben loved Marvel, and this line seems appropriate – “For what is grief, if not love persevering?” Services, under the direction of Allen Mortuary, will be as follows: Saturday, May 15, 2021 – Viewing from 10:00 – 11:30 a.m. with funeral following at 12:00 p.m. Haight Bench LDS Ward Building – 1650 South 500 East, Kaysville UT 84037 It is requested that masks be worn in the chapel during the service. Graveside service and interment will take place that afternoon at 3:00 p.m. North Logan Memorial Cemetery – 2075 East 2500 North, North Logan UT 84341 Condolences and memories can be shared at www.allenmortuaries.net

We are deeply saddened to announce the passing of our beloved son, brother and friend Benjamin Brad Baker, age 24, on May 10, 2021. Benjamin was born July 5, 1996. He was a happy baby and adorable toddler, walking around with binkie in mouth... View Obituary & Service Information

The family of Benjamin Brad Baker created this Life Tributes page to make it easy to share your memories.

We are deeply saddened to announce the passing of our beloved...

Send flowers to the Baker family.