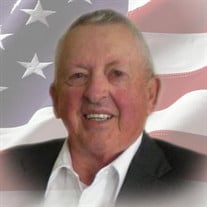 Surrounded by his children, Bernard “Buzz” Mitton, 78, beloved husband, father, grandfather and friend, passed away at his home in Wellsville on January 24, 2021. Buzz was born in Mt. Sterling, Utah, to Allen Garrett and Maxine Bowles Mitton. He was the second of four boys. His childhood in Wellsville was spent working hard on the family’s dairy farm, riding horses, and playing sports. After graduating from South Cache High School in 1960, Buzz served his country in the United States Marine Corps from 1960-1963. Buzz married Jolene Anderson on June 28, 1969 in Elko, Nevada. They were later sealed in the Logan LDS Temple on April 29, 1975. They started their family in Ogden, Utah, and shortly thereafter made their home in Wellsville. Buzz and Jolene were the parents of seven children: Mike Korth (Brandy) of Citrus Heights, California; Paula Stauffer (Tony) of Hyrum, Utah; Pamela Collins (Mike) of Hyrum, Utah; Weston Mitton (Sherrail) of West Weber, Utah; Melanie Maughan (Neal) of Hyrum, Utah; Marie Fager (Jared) of Idaho Falls, Idaho; and Daniel Mitton (Marcie) of Mt. Sterling, Utah. Work ethics learned during childhood carried into his professional and personal life. Buzz was a roofer for many years, then worked for and retired from the Cache County School District’s maintenance department. He served in many church callings, including that of scout leader. After retiring, Buzz and Jolene became campground hosts at Grand Jean, Idaho, in the Sawtooth Mountains. They served multiple missions for The Church of Jesus Christ of Latter-day Saints at the Sixth Crossing of the Sweetwater in Wyoming and Deseret Land and Livestock near Evanston. They loved handcart “trekking” with the youth and made many lifelong friends with the missionary couples they served with. Though quiet and unassuming by nature, Buzz enjoyed outdoor adventures, including camping with his family, fishing, hiking, four wheeling, and the annual “junk hunt” with the boys. He and Jolene enjoyed going on spontaneous road trips and supporting their children and grandchildren in their activities. Buzz was proceeded in death by his sweetheart and wife, Jolene, and his brothers Von, Terry, and James Mitton. He is survived by his seven children, 25 grandchildren, and 2 great-grandchildren. Funeral services are under the direction of Allen Hall Mortuary and will be held on Friday, January 29, at 11:00 a.m. in the Wellsville Stake Center, 30 South Center Street. A viewing will be held prior to the service from 9:30-!0:30. There will also be a viewing on Thursday, January 28, from 6:00-8:00 p.m. at the Allen-Hall Mortuary, 34 East Center Street, Logan, Utah. Masks are encouraged. Following the funeral services, interment will be held at the Wellsville City Cemetery. The family wishes to offer a special thanks to Holly and Sam from CNS Hospice for caring for our dear father. Condolences may be expressed online at www.allenmortuaries.net. Services will be livestreamed and may be viewed via the following link: http://mywebcast.churchofjesuschrist.org/wellsvilleutahstake

Surrounded by his children, Bernard &#8220;Buzz&#8221; Mitton, 78, beloved husband, father, grandfather and friend, passed away at his home in Wellsville on January 24, 2021. Buzz was born in Mt. Sterling, Utah, to Allen Garrett and Maxine... View Obituary & Service Information

Send flowers to the Mitton family.