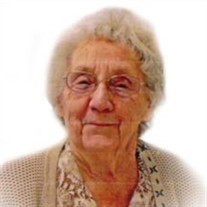 Beverly Atkinson Byington, of Wellsville, Utah, died on March 1, 2022, at the age of 93. Beverly was born in St. John, Idaho on March 30, 1928, to Lillian Deschamps and Frank Hughes Atkinson. She spent most of her early years in Cache Valley, graduating from Logan High School. She attended Utah State University, where she met Gerald Byington. After a few months’ courtship, they married on February 4, 1947, in the Logan, Utah Temple. Their married life included many moves, including Southern and Northern California, and several cities in Nevada. They spend the last decades of their lives back in Cache Valley. They enjoyed camping, rock hunting and painting, and exploring all parts of the country, as well as a few places in Europe. Beverly began her career in arts and crafts early and used those skills to teach others the joy of creativity, no matter where she and Jerry traveled. She especially loved the Nevada desert. Beverly served in many capacities in the Church of Jesus Christ of Latter-Day Saints, particularly sharing her creative talents. She also taught arts and crafts for the Reno Recreation Department for ten years, and she often said she “couldn’t wait to go to work in the morning” when she had that job. She won many awards for her talents in both painting and creative skills. Beverly was known for her sense of humor and imparting wisdom through word and art. She was happiest when teaching some form of art, and especially creating something from nothing. It has been said, “if Bev and Jerry don’t have it, you don’t need it” — always having more than enough supplies for art, or for any creative project one may want to explore. Beverly’s master work was her “God pieces”, as she called them: thirteen embroidered pieces of expression on black fabric to represent the stanzas of the poem, “The Creation” by James Weldon Johnson. The work was shown here in Logan and in Nevada, and is truly breathtaking. In her later years, Beverly crafted many books of drawings and cartoons, which she shared with many visitors to her home. She wanted to encourage as many as possible to tell the stories of their lives through drawing, and we hope she inspired at least a few to do so. Beverly is survived by a daughter Sheila, son Brent, sister Lillian (Jay) Nielsen, sister-in-law Arlene (Frank) Sampson Atkinson, and many grandchildren, great grandchildren, and great-great grandchildren. She was preceded in death by her husband Gerald Lamar Byington, two children, Susan and David, parents Lillian and Frank Atkinson, and three siblings: twin sister Shirley Atkinson Naylor, brother Frank, and sister Ann Atkinson Holmes. Funeral services are under the direction of Allen-Hall Mortuary and will be held at the Wellsville Fifth Ward Chapel at 660 South 100 West in Wellsville, Utah, on Saturday, March 12, 2022 at 10:00 a.m. Condolences may be expressed online at www.allenmortuaries.net Funeral services will be livestreamed and can be viewed via the following link (password: Beverly): https://us02web.zoom.us/j/82879584381?pwd=bFd3Mm9uYzJNZDBRV3E4SnA5blFIdz09

Beverly Atkinson Byington, of Wellsville, Utah, died on March 1, 2022, at the age of 93. Beverly was born in St. John, Idaho on March 30, 1928, to Lillian Deschamps and Frank Hughes Atkinson. She spent most of her early years in Cache Valley,... View Obituary & Service Information

Send flowers to the Byington family.