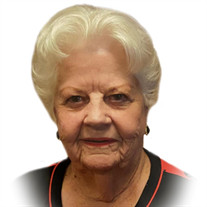 Join Zoom Meeting https://us02web.zoom.us/j/82097959788 Billie Jean Jackson Cooke passed away July 16, 2020 in North Logan, Utah. Billie Jean, or Beanie as she was called by family and friends, was born to Buelah Elva Willey and Isaac Newton Jackson, the 4th of 5th children on December 23, 1934 in a cabin near Prescott, AZ. Her early childhood was spent on the family ranch near Wagner, AZ. She fondly recalled the family traveling to Prescott once a month to do their shopping and attending school in a one room schoolhouse with the school bus being an old truck with a bench on each side in the back with a canvas cover over them to keep the weather out. In 1943, in the midst or WWII, the family moved to Long Beach, CA. Billie Jean spent the rest of her school years in Long Beach graduating from Banning High School. After graduating she married Robert Davis and had one son, Todd Davis. They were later divorced. In August of 1966 she moved to Smithfield, Utah and married Dee L. Benson. Dee passed away in November of 1983. She married Wayne M. Cooke on Oct. 17, 1986. Billie was never afraid of hard work. Whether is was driving a truck out hauling hay or taking care of the cattle. Later on she worked at Bourn’s for many years until she retired. Billie was a giving person; always helping people she knew in need whether it was buying groceries or giving them a little money to help with bills. She was involved in the American Legion Auxiliary, Post 58, for many years. Billie is survived by her husband, Wayne Cooke; her son, Todd (Sandra) Davis; step-son, Tony Cooke; grandkids, Brandie (Dave Rivera) Davis, Tasha Crozier, Megan (Justin) Gish; great-grandchildren, Chase Davis, Kate and Remi Gish, and Parker Barlow. She was preceded in death by her parents; her siblings Zola Gilbraith, Dorothy Lacioppa, Douglas Jackson, and Frank Jackson; and great-grandson, Jaxon Gish. Services are under the direction of Allen-Hall Mortuary. A Graveside Service will take place Monday, July 20, 2020 beginning at 11:00 AM at the Smithfield City Cemetery. Condolences may be expressed online at www.allenmortuaries.net

The family of Billie Jean Jackson Cooke created this Life Tributes page to make it easy to share your memories.

Send flowers to the Cooke family.