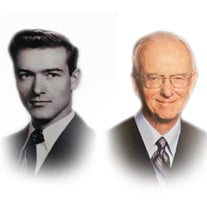 Boyd Parker Israelsen, 93, passed away October 9, 2021 from complications of congestive heart failure. Boyd was born March 12, 1928 to Vernon L. and Stella Parker Israelsen in Logan, Utah. His childhood and youth were spent in Utah, Wisconsin, Washington DC, and Ohio, where he graduated from high school in Cleveland in 1946. Military service followed during 1946-48 in the U.S. Army of Occupation in Japan, first in the 24th Infantry Division and then as a clarinetist in the 296th Army Band at I Corps Headquarters in Kyoto. After a year at Utah State University in 1948-49, he attended the California Institute of Technology (Caltech) in Pasadena, CA receiving bachelor’s and master’s degrees in electrical engineering in 1952 and 1953. He and Carma Croshaw of Logan were married in 1953 in the Logan LDS Temple. Following four years at Caltech’s Jet Propulsion Laboratory in Pasadena (now under NASA) he attended graduate school at Stanford University in Palo Alto, CA receiving his doctorate in electrical engineering in 1960. He then began a 29-year career at Watkins-Johnson Company, a Palo Alto microwave electronics firm. He and Carma raised their five children in Los Altos, CA. On retiring in 1988, Boyd and Carma moved back to Logan and Boyd began a 10-year second career as an adjunct professor in USU’s Department of Electrical and Computer Engineering. There he taught engineering design, project management and technical writing, and served as advisor to the USU student branch of the Institute of Electrical and Electronics Engineers (IEEE). Concurrently, he functioned as volunteer project manager for the restoration of Logan’s Ellen Eccles Theatre, for which he received the Utah Governor’s Silver Bowl Award in 1996. Other community involvement included membership in the Logan Kiwanis Club, and service on the boards of Cache Valley Center for the Arts (CVCA) and Cache County American Red Cross. His membership in the Church of Jesus Christ of Latter-day Saints provided numerous growth opportunities, including Bishop, high councilor, stake president’s counselor, regional welfare agent, and Patriarch. He and Carma filled a service mission for Logan LDS Employment Services in 1999-2000, and in the Ohio Cincinnati Mission 2002-2003. Boyd is survived by his family of 79, including his wife Carma and five children: Carla Randall, Beaver Dam, Utah; Loren and Corinne Israelsen, Salt Lake City, Utah; Craig and Tamara Israelsen, Springville, Utah; Laura and Alejandro Rubalcava, Monarch Beach, California; and Richard and Jennifer Israelsen, Salt Lake City, Utah. 26 grandchildren and 34 great-grandchildren are their greatest blessing, and a bounty unforeseeable 68 years ago. He is preceded in death by his parents, his sister Barbara I. Shearer and brother-in-law Raymond C. Shearer. Funeral services will be held on October 16, 2021 at 1:00 pm at the Cobblestone 2nd Ward building at 420 W 100 N, Providence, Utah. A viewing will be held at the church prior to the services from 10:30-12:30. Interment will be in the Hyrum City Cemetery. In lieu of flowers, please consider donating to the Humanitarian Aid Fund of the Church of Jesus Christ of Latter-day Saints at www.donate.churchofjesuschrist.org Warmest appreciation is extended to the many doctors and hospice workers that assisted Boyd and Carma over the past several years. Click the below link to view the services live (password: Boyd): https://us02web.zoom.us/j/88599743358?pwd=aWlaNVdhWGF2VHR1a0E5QTUzTEw4QT09

Send flowers to the Israelsen family.