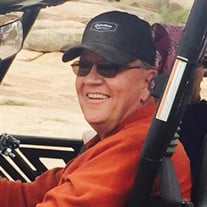 Bradley Clyde Bell passed away on Wednesday October 20th, 2021, unexpectedly during transplant surgery. He was welcomed home by his mom and dad, Verna and Hyrum Bell, as well as his brothers Greg, Dorrell, and Derick, and his father in law, Bill Ryan. Brad was born May 1st, 1953 in Idaho Falls, Idaho. He was the sixth of fourteen children. He is survived by his brothers, Jeff, Doug, Forrest, Bart, Terry, Gene, as well as his sisters Kathleen, Laurelie, Lorene, and Melanie. Brad attended Minico High School and loved sports. He played football, basketball and baseball. After graduating, Brad joined the Army and served four years. He met and married Denise Child, and they had four daughters . Jenni, Cassi, Cami and Natalie . They later divorced. In 1993, Brad met the love of his life, Janet Hall. Janet came with three of her own children, Jim, Kim, and Lissa. But as soon as they were married, he called these bonus three his own. Brad and Janet had a marriage that we all envied. An extraordinary one-of-a-kind love story. They were each other's world for 28 years . Brad loved his family and loved spending time with them. He loved fishing, gardening and golfing. He loved service and held many callings in church throughout the years. Brad is survived by his wife, Janet, and their seven children: Jenni Crook, Cassi Gardner, Cami (Darren) Ashworth, Natalie (David) Gee, Jim (Shari) Hall, Kim (Chad) Bolen and Lissa (Jereme) Dewitt. He is also survived by their 18 grandchildren and 3 great grandchildren. Funeral services are under the direction of Allen-Hall Mortuary and will be Thursday, October 28th 2021 at the Hyrum 6th ward. 455 E. 100 S. in Hyrum, Ut. There will be a viewing from 10:00 - 11:30 am and the funeral will follow at 12:00 pm. Interment to follow in the Logan City Cemetery. For those unable to attend the funeral, you can follow the link below for a live Zoom broadcast at11 AM MST. https://zoom.us/j/98332069421?pwd=OHd6QzErTkNRcnJsdlJPVzVrdU1JUT09 Condolences may be expressed online at www.allenmortuaries.net

Bradley Clyde Bell passed away on Wednesday October 20th, 2021, unexpectedly during transplant surgery. He was welcomed home by his mom and dad, Verna and Hyrum Bell, as well as his brothers Greg, Dorrell, and Derick, and his father in law,... View Obituary & Service Information

Send flowers to the Bell family.