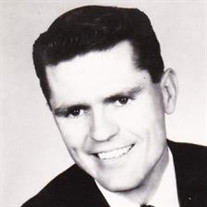 Services may be viewed online via the following link: https://us02web.zoom.us/j/85490755267 Our dear father, grandfather, great-grandfather, brother and friend passed away peacefully in the early morning hours of July 8th, in the presence of his loving family. Bruce was 91 years of age and the patriarch of the family; he lived a long and fulfilling life of service and devotion alongside many interests and pursuits. He was born in Logan, Utah, on October 24, 1928, to Georgia Rebecca Willis and Wesley Boden Ensign. Bruce was the second of five children and grew up loving his childhood in Cache Valley. Bruce had so many fond memories of ice skating in the park below the temple, dances, hiking, and walking to the Whittier School in winter, uphill (both ways)…barefoot. His family moved to Glendale, California where Bruce graduated from Glendale High School in 1947. He was a veteran, serving his country in the Korean War. Upon returning home, he attended Brigham Young University where he remembers dating more than studying. From there he went on a mission for the Church of Jesus Christ of Latter-day Saints, serving in the West Central States. On September 19, 1958 he married Bessie Lee Gentry (Betz) in the Los Angeles Temple. He earned his bachelor’s degree at UCLA and his master’s degree at the University of Utah. Bruce moved across country to Michigan, where he received his PhD in audiology and speech pathology from Wayne State University. Bruce and his family, now including six children, moved to Mississippi in 1972 and Bruce began a career as the Chief of Communicative Disorders for the Veterans Administration there. When he retired, he returned to Utah, where his wife Betz passed away in February 2005. Bruce married Joyce Gunnell Powers a year and a half later on September 15, 2006. They resided in Providence, Utah until her death earlier this year. Bruce was an active member of his church, serving in multiple callings with a strong and unwavering faith in God and Jesus Christ. He was a natural artist, athlete, singer, and poet. He loved the outdoors and often took his children and grandchildren hiking. But most of all, he loved to run. Bruce completed hundred of marathons and ultra-marathons in his lifetime, most often finishing first in his age group. He ran the Boston Marathon several times and in 2002 was a torchbearer for the Winter Olympics. Bruce is respected and loved by all of his children. His wisdom, humor, and love for his family will be dearly missed. Bruce is survived by his six children; Bruce (Carol) of American Fork, Utah; Eric (Yu Mi) of San Francisco, California; Marc (Heidi) of Paradise, Utah; Juliette of Alpine, Utah; Lance of Titusville, Florida; and Paul of Springfield, Missouri, his two brothers Jerald and Douglas, 14 grandchildren and 11 great grandchildren. He was preceded in death by his parents, brother Robert, Sister Janice (Bennett), wife Betz and wife Joyce. Due to the Coronavirus pandemic, the funeral service will be held in the chapel of Allen-Hall Mortuary, located at 34 East Center in Logan on Wednesday, July 15th at 12:00 noon. A viewing will be held prior to the funeral from 10:00-11:30 am. Interment will follow at the Logan City Cemetery. For those unable to attend, the funeral service will be streamed live at www.allenmortuaries.com

Services may be viewed online via the following link: https://us02web.zoom.us/j/85490755267 Our dear father, grandfather, great-grandfather, brother and friend passed away peacefully in the early morning hours of July 8th, in the presence of... View Obituary & Service Information

The family of Bruce Willis Ensign created this Life Tributes page to make it easy to share your memories.

Send flowers to the Ensign family.