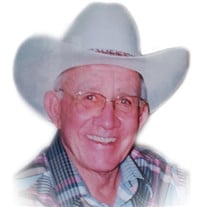 Bruce W. Olsen of Hyrum passed away peacefully February 4, 2020 surrounded by his family. Bruce was born in Emery, Utah, on April 3, 1933 to Alonzo and Wynona Olsen. Bruce married Judy Ann Adams from Douglas, GA on Sept. 27, 1968 in the Salt Lake Temple. Bruce worked for 32 years for the Utah Division of Parks & Recreation. He was the first ranger at Dead Horse Point and also worked at Arches, Canyonlands, Bear Lake and retired as superintendent of the Hyrum State Park. He also worked for Hyrum City for 20 years. Bruce served his first mission to Finland at 19 and then two more missions to the Stockholm Sweden temple with his companion Judy Ann. Bruce served in the US army and competed in the rifle and pistol competition where he took first place in both. He was sent to Ft. Dix, NJ, to compete in the First Army competition. There he took first place in the 300 yard rapid fire with a gold medal by Lt. General Thomas W. Herren, commanding general of the First US Army. He loved country music and began playing the guitar at 16. He participated in three western bands-one at Utah State, one in Finland, and one in Brooklyn NY when he was serving in the US Army. He continued to play solo as the “Country Gentleman” for much of his retirement. His finest creation (besides his amazing children) was the old west town he constructed in his backyard complete with bunkhouse, jail, bank, general store, saloon, and the finest outhouse in Hyrum. Bruce was a faithful member of The Church of Jesus Christ of Latter-day Saints all his life. As his children, this man was the world to us. He was the perfect example of hard work and creativity and quick with a smile and a tease. His greatest loves were his wife, the outdoors, music, donuts, peanut M&M’s, and his children that he was so proud of. He is survived by his children Kevin (Kelly) of Kaysville, Connie (Tim) of Eagle Mtn, and Kathy (Ted) of Hyrum. He has 9 grandchildren and 1 great-grandchild. He is also survived by his brother Cecil, and sisters-Ada, Sheila, and Karen. We would like to thank the staff at Blacksmith Fork Assisted Living for the amazing care and love they showed to our dad. We know his horse Dusty was waiting for him at the pearly gates to ride this cowboy home. We love you Dad. A viewing will be held from 6-8 pm on February 11 at the Allen-Hall Mortuary, Logan Utah. Funeral services will be held on February 12, at the LDS church on 450 east 100 south Hyrum at 12:00 pm. He will be interred at the Hyrum City Cemetery following the service.

Bruce W. Olsen of Hyrum passed away peacefully February 4, 2020 surrounded by his family. Bruce was born in Emery, Utah, on April 3, 1933 to Alonzo and Wynona Olsen. Bruce married Judy Ann Adams from Douglas, GA on Sept. 27, 1968 in the Salt... View Obituary & Service Information

The family of Bruce W Olsen created this Life Tributes page to make it easy to share your memories.

Send flowers to the Olsen family.