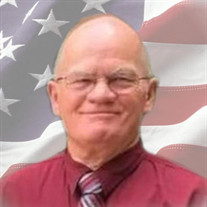 Bryon Madsen Bingham Returned to his Heavenly Home Monday, March 15, 2021 after a valiant battle with a sudden illness. Bryon was the 7th child of Earl Lewis and Afton Madsen Bingham. He was born en route to Brigham City Cooley Hospital, February 28, 1948. He attended Honeyville Elementary, Box Elder Jr. and Senior Highs. He grew up on the family farm where he worked hard and learned valuable life lessons. Bryon served a LDS mission to England. He enlisted in the Army where he was stationed in Panama during Vietnam. He worked in various professions: Sales, Police Officer, Fire Fighter to name a few. After retiring as a supervisor at Autoliv, he spent his time doing good. He served for years in LDS Bishoprics, as a Logan Temple Worker, and gave aid wherever he saw a need. He captured moments in pictures and chopped many piles of fire wood. He was wise and had a way of sharing his wisdom without judging. We will miss his sense of humor, his quick wit, his contagious laugh, and the way that he found the best in people in every situation. Bryon is survived by his wife of 26 years, Janice Coley Bingham-Hyrum, daughters RoseAnn Bingham de(Ariel) Perez-Panama, Bridget (Shaun) Gray-Brigham City, step-daughter Mashelle (Chris) Simpson-Missouri, daughter-in-law Sundee Harrop-Hyrum. Grandchildren: Ariel Ernesto Perez, David Enrique Perez, Kalan (John) Skinner, Kyson (Taylor) Hester, Klaysen Gray, Kota Gray, Kreed Gray, Luke Harrop, Shelby (Aidan) Mendenhall, Alexis Husketch, Austin Novak. Great- Grandchildren: Jase, Kyler, and Emmett. Siblings: Darwin, Bernice Earl, Edward, Irene Jensen, Boyd, Douglas, and many nieces and nephews. Bryon made efforts to know each one. Preceding him in death are his parents. Infant son: Jason. Stepsons: Jason Harrop and Harris Jones. Infant grand-twins: Karter and Karmichael Gray. Siblings: Erlene VanWeerd, Marilyn Baker, Rees, Jeanette Jones, Lewis, Clark. A viewing will be held at Allen-Hall Mortuary, 34 E. Center Street in Logan, Sunday, March 21 from 5 to 7pm and Monday before the funeral from 10:30-11:30am. Funeral services will be on Monday, March 22, 2021 at 12:00pm at the Hyrum No. Stake Center, 243 Apple Dr., Hyrum. Following the services, the burial with military honors will be at the Honeyville City Cemetery. Services will be livestreamed and may be viewed online via the following link: https://us02web.zoom.us/j/84963932144?pwd=N3d5cjZtTFZKdTFHWXpHQXBaY3Yxdz09 Password: Bingham The family wishes to express thanks to all the medical personal that provided Bryon with wonderful care.

Send flowers to the Bingham family.