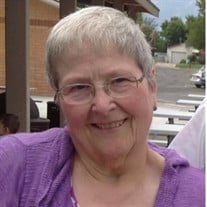 Carol Zeneth Israelsen Hogan fought a good fight and finished her mortal sojourn on September 3, 2020, following a brief hospitalization and multiple health challenges. She was born December 14, 1943, the first child born to Floyd Victor Israelsen and Zeneth Gilgen. Four more children joined that union each passed away until Zeneth was unexpectedly called home in April 1947. Floyd remarried in 1949 to Mildred Nash; Carol eventually gained nine more siblings (eight still living). Raised on her family’s farm in Young Ward, Carol learned the attributes of faith in God, thrift, hard work, teamwork, loyalty, industry, self-reliance and dependability. As the oldest child, she was somewhat of a second mother to all her younger siblings and was so good to each and every one. Carol served a Gulf States Mission for The Church of Jesus Christ of Latter-day Saints. She then attended Utah State University and obtained her teaching degree. She taught for a time at the Intermountain Indian School in Brigham City. She later attended Brigham Young University and obtained her nursing degree. She was an unabashed Cougar fan throughout her life and rarely missed cheering for her Cougars at every televised game. One of her first nursing assignments was in the Blanding, Utah area working among the Lamanites, a people she came to dearly love. After receiving her master’s degree in Instructional Technology from USU, she began working at Logan LDS hospital as head of the Education Department when Logan Regional Hospital was built and was instrumental in assisting the doctors with medical research and training staff with new skills, including the first computers and later the internet. Purchasing a home as a young single adult, Carol tackled projects of remodeling and updating without the help of YouTube tutorials. If there was a job that needed done, she figured out how to do it and got it done. There was nothing Carol could not do. She was skilled in carpentry; she was an accomplished seamstress, crocheter and quilter; she had a beautiful singing voice; her homemade rolls and banana bread were the best on the planet; and she enjoyed growing a beautiful garden even in her final years when space was limited in her tiny yard – and sharing the bounty was her favorite part. She loved to give and share and serve. Many a missionary served in part due to her generous financial support. Single for many years, Carol was thrilled to meet and marry her soulmate Marion Edward (Bud) Hogan in 1984 and became a wife, mother, and grandmother all in one day. She embraced these new roles with passion, unconditional love, acceptance, and absolute devotion. She was so thrilled to add Katherine, Karen, Karla, Kimberly, Roy, Robert and Lionel to her family tree. Dennison Lee was a Lamanite son that lived with the family for a time and was welcomed wholeheartedly into their home. Together Bud and Carol learned woodworking and created intricate masterpieces. They also loved model trains and together created some amazing train sets that are enjoyed by extended family to this very day. A major focus of their time together was family history and temple work and they spent countless hours in this endeavor. Carol and Bud spent 18 wonderful years together and excitedly anticipated serving a family history mission together following their retirement, but Bud’s untimely death in January 2002 prevented that dream from becoming reality. Carol instead embraced the opportunity of serving as the director of the Family History Center in a USU stake and helping the students she mentored develop the passion and skill for family history research that she enjoyed. Many were blessed by her tireless and selfless service there. In recent years Carol welcomed and cherished the opportunity of tending great-grandchildren practically full-time and enjoyed the newborn, toddler, preschool and elementary school stages that she had missed earlier on. Each of these precious children will treasure lifetime memories of the time she spent with them, the personal attention she devoted to each one, family stories she shared, songs she taught, values she instilled and the example she set. They will also cherish the intricate crocheted blessing dresses and beautiful handmade quilts she made for each with love. Her family circle extended far beyond those in her formal family and included those from across the globe from varied creeds, cultures and beliefs. Each was extended absolute acceptance and unconditional love. Her Thanksgiving dinners and 4th of July barbeques included friends and family from near and far that likely had nowhere else to go but were welcomed with open arms. Carol truly epitomized ministering before the term was made popular. Carol was preceded in death by her husband Bud; parents Floyd, Zeneth and Mildred; and a son-in-law Charles Claybrook. She is survived by each of her children: Katherine (Kathy/KJ) Hogan, Karen Heintz, Karla Claybrook, Kimberly (Jeff) Stewart, Roy (Penni) Hogan, Robert (Jodi) Hogan, and Lionel Billie (Emma) Hogan and her siblings: Reta (Brent) Tischner, Bernard (Vicki) Israelsen, Clark (Marsha) Israelsen, Evelyn (Dale) Maples, LaDean (Bruce) Thorne, Victor (Jill) Israelsen, Dixie (William) Allen, KayDawn (Tracy) Sorensen, grandchildren, great-grandchildren, and numerous others who she unequivocally claims as family. A viewing will be held Friday morning, September 11 from 9-10:45, followed by her funeral at 11:00. Because of Covid-19 restrictions those attending both viewing and funeral will be by invitation only. The funeral service will be available online at https://us02web.zoom.us/j/84991294942. Burial service will be held at Logan City Cemetery and is open to all wanting to honor Carol. Please follow proper social distancing practices. Condolences and thoughts may be expressed online at www.allenmortuaries.net The family thanks all who loved and served Carol in any way. She never met a stranger -- just friends whose names she hadn’t yet learned. In lieu of flowers donations can be made to the missionary or humanitarian fund of The Church of Jesus Christ of Latter-day Saints or just go do some service of your choice in her honor.

The family of Carol Hogan created this Life Tributes page to make it easy to share your memories.

Send flowers to the Hogan family.