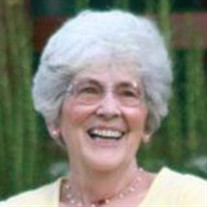 Our much loved, incredible and amazing mother, sister, aunt, grandmother, and great-grandmother, Carolyn Condie Bladen, passed away from this earthly life Thursday, June 10, 2021, after a short illness. Carolyn was born December 22, 1938, in Cedar City, Utah, to William Arthur and Cora Armstrong Condie. Carolyn was the fifth of six children. Carolyn graduated from Cedar City High School and was actively engaged in choir and orchestra. Carolyn attended Southern Utah College for a short time while pursuing a career in banking. She met Kenneth Tobler Bladen in 1959 and they married on July 20, 1960, in the St. George Utah LDS Temple where they were sealed for time and all eternity. The young couple relocated to Provo, Utah, and stayed there for less than two years. They made their way to Logan, Utah, and remained in Logan the rest of their lives. Carolyn was a homemaker as she and Ken raised their young family. As her youngest child entered elementary school, Carolyn returned to her banking career and worked for Zions Bank for the next 18 years. Carolyn was one of the most industrious women you could ever meet! Carolyn had a deep desire to increase the natural talents God had given her. She was an accomplished pianist, violinist, chorister, seamstress, quilter, crocheter, calligrapher, baker, candymaker, food-canner, gardener, jigsaw puzzler, word search solver, and the list goes on. Carolyn was an active member of the Church of Jesus Christ of Latter-day Saints. She rendered a lifetime of service to members and neighbors alike. She served with passion and commitment in all her callings and was a true example of love and faith! Carolyn suffered three great losses in her life that impacted her earthly journey. On April 4, 1967, she gave birth to a son, Steve Condie Bladen, who was born with a heart defect. On May 17, 1967, during open heart surgery at Primary Children’s Hospital in Salt Lake City, Steve passed away and young parents, Ken & Carolyn had to bury their six week old son. On September 9, 2012, Carolyn had another worst day of her life when she learned her 47 year old son, Scott, had died in a tragic car accident. Her sons memories were forever engraved in her heart and she missed them both terribly. And on March 17, 2017, her beloved Ken passed away after a long struggle with illness and arthritis. What a wonderful reunion has taken place with her two sons, husband Ken, son-in-law Ray Peterson and grandson Oren Shuler on the other side of the veil! Carolyn is survived by her children: daughter Debra Peterson, Santaquin, UT, daughter Diane Frank (Craig) Providence, UT, daughter Brenda Olfson (Mark) Central Point, OR, son Keith Bladen (Kelsey) Hyrum, UT, daughter Donna Bordelon (Philip), Klamath Falls, OR, brother Mel Condie (Marian) Tooele, UT, brother Richard Condie (Joyce) Washington, UT, sister-in-law Geri Condie, Ivins, UT, brother-in-law Mark Harris, Sandy, UT, sister-in-law Carol Condie, Beaver, UT, and brother-in-law Boyd Bladen, St. George, UT. Also surviving are 20 grandchildren, 13 great-grandchildren and many nieces and nephews all of whom she loved dearly. Memorial services are under the direction of Allen-Hall Mortuary and will begin with a viewing Wednesday, June 16, 2021, from 6:00pm – 8:00pm. An additional viewing will be held the following day, Thursday, June 17, 2021, from 10:00am – 11:00am, with funeral services to follow at 11:30am. All viewing and services will be held at Allen-Hall Mortuary, 34 East Center Street, Logan, Utah. Special thanks to the incredible staff at McKay-Dee Hospital in Ogden. As an expression of sympathy, contributions may be made to Intermountain Primary Children’s Hospital https://intermountainhealthcare.org/primary-childrens/give. Services will be livestreamed and may be viewed via the following link: https://us02web.zoom.us/j/82236991242?pwd=SytibUFjeVBNNktUTTZJaDhpOUdSUT09 Password: Bladen

Our much loved, incredible and amazing mother, sister, aunt,...

Send flowers to the Bladen family.