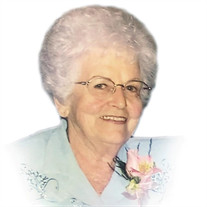 An elect daughter of God, 94 year-old Clarice Condie Porter stepped into eternity on October 4, 2020 and was received into an anticipated heavenly reunion. Clarice was born in Preston, Idaho on July 19, 1926, the second of 5 children to Fern and Lettie Condie. When Clarice was in the 9th grade, she met a handsome young man, John Porter. They were sweethearts throughout high school, during the time John was stationed in Japan during World War II and while they both attended USU. They were married and sealed in the Salt Lake Temple on September 5, 1947. After John graduated from USU, they moved to Clifton, Idaho, where they raised their family. Clarice was never idle. She was either working on the farm, sewing clothes for her family, making quilts, embroidering or painting ceramics. She was an excellent cook and was known for her rolls, pies and candy. She was gifted with a beautiful soprano voice and sang throughout the valley as a soloist and in quartets. After John and Clarice became empty nesters, they moved to Providence, Utah. They traveled the world, made great friends and played pinochle every Friday night. Clarice loved to host parties and became known as the “Party Girl”. John and Clarice served the Lord actively by being exemplary examples of serving others. Even in Clarice’s 90th year, she would deliver food to those in need. John and Clarice served a mission in London England and then served in the Logan Temple for many years. Clarice is survived by her 5 children: Janet (De) Henderson, Nampa, ID; Louise (Kent) Stanton, Fruit Heights, UT; Jill (Bill) Baker, St George, UT; Kent (Lorrie) Porter, Springfield, MO and Julie Porter, Las Vegas, NV. She is also survived by 12 grandchildren and 21 great grandchildren and a brother, Fern Jay Condie. She was preceded in death by her husband, parents, an infant brother, an infant grandson, John Howard Henderson, and 2 sisters, Bonnie Buttars and Corene Woodward. A viewing will be held at Allen-Hall Mortuary in Logan on October 10, 2020, 10:30 – 11:30 am followed by graveside services at the Preston, ID cemetery, approximately 1:00 pm. In lieu of flowers please donate to your favorite charity.

An elect daughter of God, 94 year-old Clarice Condie Porter stepped into eternity on October 4, 2020 and was received into an anticipated heavenly reunion. Clarice was born in Preston, Idaho on July 19, 1926, the second of 5 children to Fern... View Obituary & Service Information

The family of Clarice Condie Porter created this Life Tributes page to make it easy to share your memories.

Send flowers to the Porter family.