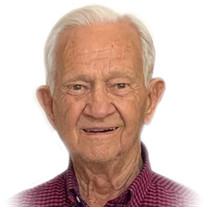 ClaVel K. Haslam passed away on Sunday, May 2, 2021, after 93 fun and productive years. He was born to Joseph and Zetta Haslam on July 29, 1927, in Lewiston, Utah, where he spent the first 18 years of his life on his family’s farm, hauling hay and milking cows. He grew up with four special siblings, Raymond (Jackee), Marlan (Pat), Larry (Priscilla), and Carol (Ray). After graduating from North Cache High School, ClaVel attended a semester at Utah State University before serving a two-year mission in Texas and Louisiana. After his mission, he pursued a pretty young girl named Shirley Rasmussen, and they were married in the Logan Temple on May 5, 1950. During their marriage, they were blessed with seven amazing children: Roxanne (Gary), Vickie, Debra (John), Brent (Ann), Marty (Wendy), Tami (Bruce), and Stephanie. Their posterity now stands at 92. While working his first job at Pete’s Spudnut on South Main in Logan, ClaVel met Charles “Chick” Bullen, who had the Ford tractor dealership next door. Soon after, ClaVel was selling tractors and equipment and helping Chick buy property on North Main to build a new dealership with a service station and a tire-recapping shop. As Vice President of Bullen’s Inc., ClaVel worked to add Allis-Chalmers tractors and introduce sprinkler irrigation to Cache Valley. In 1985, he retired after 36 years. ClaVel and Shirley owned three different homes in Logan before buying and remodeling an older home in North Logan to accommodate their family. After they raised their children, they served a two-year mission in Sydney, Australia, and in 2009 moved to Providence. On June 11, 2013, ClaVel’s sweetheart and eternal companion, Shirley, passed away after 63 years together. ClaVel was always active in the Church of Jesus Christ of Latter-Day Saints and served as Bishop, High Counselor, temple worker, sealer, and many others. Funeral services are under the direction of Allen-Hall Mortuary and will be held on Saturday, May 8, at 11:00 a.m. at the Providence South Stake Center, 360 E 450 N, Millville, UT 84326. Friends and family are invited to a viewing from 9:00-10:30 a.m. Interment will be at the Logan Cemetery following the services. Masks encouraged. Services will be livestreamed and may be viewed online via the following link: https://us02web.zoom.us/j/81586252244?pwd=T25zU3RFZXNnYjNkWnlaMVF4Tk50Zz09 Password: Haslam

Send flowers to the Haslam family.