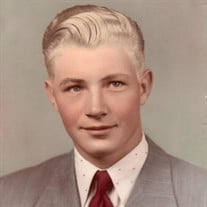 Clive Wendell Arave, of North Logan, Utah, passed away on April 2, 2022, 44 days after his sweet wife of 71 years. He was born May 12, 1931, the youngest child of Joseph Clarence Arave and Rhoda Elvera Peterson. He was born and spent his happy childhood on the farm in Taylor, Idaho. Taylor was a small town that consisted of the school building, the LDS church and the Arave store. He had many stories of adventures with his brother, Marvin, and many cousins who lived near by. They enjoyed fishing, riding horses to school, swimming in the local swimming hole, and going to the cattle auction with their dad in Idaho Falls. The Arave farm was 160 acres. They had two milking cows, a large herd of cattle, sheep, pigs and chickens. They grew alfalfa to feed the cattle. There was plenty of work to do. Dad said he always had a job, starting at the age of 8. His favorite job was driving the team of horses to thresh wheat. His least favorite job was thinning beets, which he did side by side with his sister, Jean. He was heard to say no child should ever have to thin beets! He started driving at 14 years old which increased his abilities on the farm. He started getting wages for his work from his dad. The Arave family was hard working and resourceful. Dad said they really didn’t suffer either during the Depression or the war because they kept themselves self-sufficient. His father was out working the farm from 5 am every day except Sunday. His mother kept a huge garden, preserved food, collected eggs, churned butter. Dad said he worked a lot because he needed to and he wanted to. He attended Shelley High School where he met his sweetheart and future wife, Carley McMurtrey. They were married in the Idaho Falls temple October 10, 1950. After a honeymoon in Jackson Hole, Wyoming, Dad left for Fort Worden, Washington, where he was stationed with the US Army. Mom joined him a few months later. Their first child, Wendy, was born there. Dad was proud to serve in the military. After 2 years, the young couple headed to Utah State University, where Dad received his BS and MS degrees in dairy science. Two more children joined the family, Stephanie and Joe. After graduation, Dad accepted a job in California and worked with a purebred holstein dairy for two years. He decided to continue his education at UC Davis where he received his Ph.D. degree in Genetics & Dairy Cattle Breeding. During this time another daughter, Christine, was born into the family. He began his professional career as an Assistant Professor of Agriculture at Chico State College. He later became a professor on the faculty at Utah State University. Throughout his career he taught courses in dairy cattle judging and animal breeding and successfully coached the dairy cattle judging team. He was nominated as Professor of the Year at USU. He was a student advisor and mentored many students through the years. His biggest contribution was his research in animal behavior. He has over 100 publications or abstracts in this field and published a book. He has become nationally and internationally recognized as an animal behavior specialist. He helped several foreign countries set up research projects and hosted several foreign scientists at USU. In 1967, Dad and Mom built their dream home in North Logan. This is where they welcomed Lorraine and James to the family. After 31 years, Dad retired from USU. He and mom volunteered as teachers of English sponsored by the BYU International Studies Program. They had the opportunity to tour much of China. Dad’s career afforded them opportunities to also see much of Europe. Dad loved to be active. He golfed regularly and played racquetball 3 times a week, where he was formidable for a 90 year old. He enjoyed gardening and kept his large yard groomed and cared for his apple trees and grape arbor. He built a shop where he created so many beautiful projects from wood. He built cedar chests & toys for the grandkids. He always loved learning, keeping up with current affairs and always had a book to read. He served as president of the North Logan Lions Club for a time and enjoyed his community associations. Dad was a faithful member of the Church of Jesus Christ of Latter-Day Saints and served in many capacities, ward clerk, stake executive secretary, and temple officiator. He loved the gospel and had a strong testimony. He strove to be the best man he could be. He was a good friend and positive influence on many. He was a wonderful father and grandfather. He was preceded in death by his wife, Carley, his parents, two brothers (Marvin & Orval), and five sisters (Beulah, Inez, Norma, Jean and Shirley) He is survived by his six children: Wendy (Bill Hinton), Stephanie (Jim Aitken), Joe (Julia Wiberg), Christine (Gordon Baker), Lorraine (Bruce Helgeson), James (Shonie Davis). Memorial services will be held on Saturday, April 9th at noon at the North Logan LDS chapel on 1900 N. 1550 E. with a viewing prior for family and friends at 10 am. Condolences and memories may be shared online and a video presentation of his life seen at www.allenmortuaries.com. Services will be live streamed and can be viewed via the same link. Funeral arrangements by Allen-Hall Mortuary. Special thanks to all who have reached out to our family at this sad time. Special thanks to the nurses at the TCU at Logan Regional Hospital for their tender care of our dad. Our hearts are broken. You will be missed, Dad, but your legacy will live on in us and all you knew. We love you. RIP till we meet again. Services will be livestreamed and may be viewed via the following link:https://us02web.zoom.us/j/86404335148?pwd=dGUzeDZ1dUFvL1pPOE9lTXhEZllqZz09 Password: Arave

Clive Wendell Arave, of North Logan, Utah, passed away on April 2, 2022, 44 days after his sweet wife of 71 years. He was born May 12, 1931, the youngest child of Joseph Clarence Arave and Rhoda Elvera Peterson. He was born and spent his... View Obituary & Service Information

Send flowers to the Arave family.