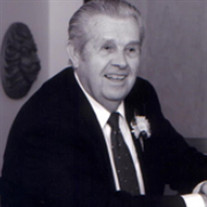 Clyde Merlin Anderson, well known Logan businessman, passed away on October 7 at age 91 after a long and productive life. Clyde was born on April 1, 1929 in Logan to Moroni (Rone) and Nettie Anderson, the youngest of three. He grew up on upper Canyon Road and worked alongside his father in the family dairy business. He learned the lessons of hard work early, also delivering newspapers as a boy. During high school Clyde was a member of the Pershing Rifles drill team and was involved with choir and the musicals. After graduation he attended USAC (USU) and worked at the family store before he was drafted into the US Army and served for two years at Ft. Riley, Kansas as a supply sergeant. He married Geneil Hughes shortly before he was drafted, on August 2, 1950 and she accompanied him to Kansas. When Clyde returned from the Army he began working with his mother at her store, Logan Seed and Feed, later Anderson’s Seed and Garden Center. He also returned to college, graduating in 1958. He was a fixture at the business and was always there, dispensing seeds, information, and advice. Clyde, with his brother, Bud, took over after their mother’s death and were co-owners until Bud’s retirement when Clyde became the sole owner, officially retiring at age 70 in 1999. Clyde was a gifted athlete and played baseball and softball for many years, usually as a pitcher. He was a member of several championship teams. He was a lifelong Yankees fan and was rooting for them until the last. He also enjoyed playing golf and fishing. He was a master gardener and his garden was always a showpiece, furnishing his family and friends with produce for decades. Music was always a large part of Clyde’s life and he was involved with numerous singing groups. He was a member of the Imperial Glee Club for 60 years and sang with his barbershop quartet, The Kingsmen Quartet, for over 30 years. He also participated with Geneil as charter members of the Towne Singers mixed chorus and were active with that group until 1996. He was proud that his quartet was honored to sing for several prophets and other community leaders and he never refused a request to share his talent. Clyde held numerous positions in The Church of Jesus Christ of Latter-day Saints and served for many years in the Logan Temple. Clyde and Geneil have six children: Marian (Bob) McCann, Karen (Scott) Jeppesen, Paul (Debbie), Lorraine, Brian (Kathy) and Mark (Ronnette). They have 20 grandchildren and numerous great-grandchildren. He was preceded in death by his parents, brother (Gilbert “Bud”) and sister (Nadine), son (Brian), and two grandsons (Daniel and Patrick McCann). Clyde has been a great example to his family and many others of hard work, honesty and service. His life will be honored with a private family graveside memorial at a later date. Condolences may be expressed online at www.allenmortuaries.net

Clyde Merlin Anderson, well known Logan businessman, passed away on October 7 at age 91 after a long and productive life. Clyde was born on April 1, 1929 in Logan to Moroni (Rone) and Nettie Anderson, the youngest of three. He grew up on upper... View Obituary & Service Information

The family of Clyde Merlin Anderson created this Life Tributes page to make it easy to share your memories.