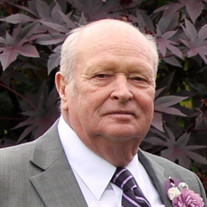 Conley Guy Schwartz beloved husband, father, and grandfather passed away peacefully in the early morning of November 16, 2020. Born in Logan, Utah on October 9, 1943 to Benjamin Jacob Schwartz and Mary Emma Smith Schwartz. He grew up in Logan and graduated from Logan High School. He entered the Army Reserve after high school and worked at JBS meat packing, formerly E.A. Miller for 43 years. Conley married the girl next door, Dixie Lee Christoffersen, on February 9, 1968 and they were later sealed in the Church of Jesus Christ of Latter Day Saints, Logan Temple on February 9, 1983. Together they have two daughters, Stacie Gittins and Marcie Lyons. He was a faithful, active member of the Church of Jesus Christ of Latter Day Saints and served in many callings. In addition to church callings Conley served his friends, neighbors, and family wherever there was need. He loved to share his humongous garden with everyone. Along with gardening he enjoyed snowmobiling and tinkering in his shop. His family meant everything to him and his grandchildren were the light of his life. He never missed an opportunity to cheer them on in all of their sporting events. Conley will be greatly missed by family and many friends. He was known as the guy with a hard candy shell outside and a soft, sweet center. Survived by his wife Dixie, daughters Stacie (Dennis) Gittins, Marcie (Lance) Lyons, grandchildren, Hailie (Brandon) McMurdie, Taryn Gittins, Koy Gittins, Max Lyons and Lucy Lyons. Sister Sharon S. Thompson. He is preceded in death by his parents. Due to COVID, a private viewing will be held for immediate family and friends on Thursday, November 19, 11:30am-12:30pm at Allen- Hall Mortuary with a graveside service to follow. Interment will be in the Hyrum City Cemetery.

The family of Conley Guy Schwartz created this Life Tributes page to make it easy to share your memories.

Send flowers to the Schwartz family.