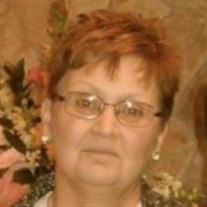 Connie Ruth Blockburger Barr passed away Tuesday, October 13th 2020, in Nibley, Utah due to health complications. Connie was born in Spokane Washington on July 29, 1947, to Charles Robert Blockburger and Martence Clark. She was the oldest of four children. Connie did most of her growing up in Nebraska, but moved to Salt Lake City during her high-school years attending South High School graduating class of 1965. Connie was an active member of The Church of Jesus Christ of Latter-day Saints. Connie married David Jess Barr, her high-school sweetheart, Feb. 25, 1966, eloping to Elko, Nevada. She and her husband, Dave, were sealed in the Salt Lake City Temple on Sept. 23, 1977. It was a beautiful day. Connie cherished the friendships she made over the years. She served in many positions and loved helping people. She was proud of her service as Relief Society President in the Salt Lake City Cannon 3rd Ward. She enjoyed going out to eat with friends and having conversations with friends, family, and strangers that quickly became friends. She loved her family. She would find time to serve them even while working a full time job. Connie and Dave were married for 54 years. Their life was simple and revolved around going to lunch, getting a Diet Coke at Maverik, playing cards with friends, cruising in his 1969 Dodge Charger, and the biggest event was going to see the children and grandchildren. Connie was always attending different school and church events. Connie is survived by her sons and daughters-in-law, Brad &(Kristy) of Casper, WY, Chris &(Randi) of Lewiston, UT, and Randy & (Tracie) of San Antonio, TX, and her 10 grandchildren. She is preceded in death by her parents, her husband and son Brent. Graveside services will be held on Monday, Oct 19th at 12 pm in the Millville City Cemetery with a live video link at www.allenmortuaries.com Arrangements by Allen-Hall Mortuary. https://us02web.zoom.us/j/84231962934?pwd=TGdzRkNGUnl4SEMrcmw1cUZLUG8rdz09 PASSWORD: Barr

Connie Ruth Blockburger Barr passed away Tuesday, October 13th 2020, in Nibley, Utah due to health complications. Connie was born in Spokane Washington on July 29, 1947, to Charles Robert Blockburger and Martence Clark. She was the oldest of... View Obituary & Service Information

Graveside services may be viewed at: https://us02web.zoom.us/j/84231962934?pwd=TGdzRkNGUnl4SEMrcmw1cUZLUG8rdz09 PASSWORD: Barr

Send flowers to the Barr family.