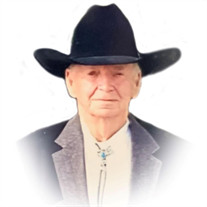 To view the live funeral click on the folliwng link: https://us02web.zoom.us/j/89870180467 Irvin “Dale” Anderson, beloved father, grandfather, hardworking cowboy at heart, and loving supporter of the Paradise community, passed away from cancer in his home on May 18, 2020, surrounded by his loving wife, children, and grandchildren. He was one month away from his 83rd birthday. Born in Kalispell, Montana, June 15, 1937, to William Irvin Anderson and Cecilia Evelyn Duffy, Dale spent much of his childhood at his family’s store (Anderson’s Grocery in Libby, MT) and fishing with his dad after church on Sundays. As an only child, Dale was the highlight of his parent’s lives. Dale lost his mom at the tender age of ten and then his father just after graduating from high school. As a proud J-Hawk, Dale attended high school in Joliet where his passion for sports led him to play basketball, baseball, and football and was even crowned Junior Prom King. His love of athletics continued throughout his life as he cheered on his children and grandchildren. He was their #1 fan. After graduation, he moved to Jackson, Wyoming where he met the love of his life, Linda, at the Jackson Hole rodeo. “We had the missionaries come to convert me but it didn’t work so we moved to Paradise and bought a house.” Little did he know, he would be converted in Paradise and was confirmed a member of The Church of Jesus Christ of Latter-day Saints by Gene Forsberg. Dale and Linda, together, raised five children and built two homes in Paradise. Dale’s work ethic and devotion to his family led to a successful career at the Defense Depot in Ogden where he was able to retire after 28 years. Dale served several terms on the Paradise Town Council and has been active in serving his community up until his health would not allow. Dale often donated his plumbing skills to save a fellow neighbor. Dale had a passion for the outdoors and loved to hunt. He spent many fall seasons with his boys guiding hunters on his favorite mule, Irene, at Arizona Creek Outfitters near Jackson Lake. Some cherished memories were fishing with friends in Alaska, trips with his wife to Hawaii, visiting family in Virginia and North Carolina, as well as watching the horse races at Del Mar, and a family cruise for his 80th birthday. Dale and Linda enjoyed serving a three year mission for The Church of Jesus Christ of Latter-day Saints at the Salt Lake City Conference Center. Remembered for his enduring love of people, passion for the simple things in life, and infectious laugh, Dale always had a ready joke and a cold Diet Pepsi in hand. He will be dearly missed by all who knew him. Dale Anderson is survived by his loving wife, Linda Anderson, five children, Dale Ray (Cindy) Anderson, Rex (Tiffany) Anderson, Travis Anderson, Tracy (Ashlee) Anderson, Tammy Johnson, and 21 grandchildren. Viewing for Dale will be held on Friday, May 22nd, 2020 beginning at 4:00 PM, at the Paradise 4th Ward LDS Chapel. Due to current state pandemic guidelines, services will be held for immediate family only. The funeral services will be at 5:00 p.m. and will be live streamed via Zoom and will be available to view on the Allen-Hall Mortuary website. Interment will follow Friday evening, 6:00 PM, at the Paradise Cemetery.

The family of Dale Anderson created this Life Tributes page to make it easy to share your memories.