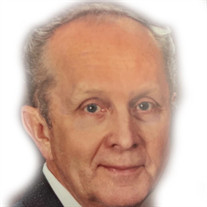 Dale Eugene Fullmer, 84, of North Logan, Utah, passed away peacefully in his home on February 3, 2020. Dale was born to Edith Mary Jensen Falslev (1908-1979) and Marvin Wayman Fullmer (1905-1942) in Smithfield, Utah. His father passed away when Dale was 6 and his family moved to Benson, Utah, to live with his maternal Grandparents, Marius and Mariane Falslev. Dale graduated in 1954 from North Cache High School where he excelled in track, football, and enjoyed singing in musicals. He also served as class president his senior year. Following High School, he served in the Army from 1955-1957. Dale met Cheryl Albretsen at a dance hall upon his return and they were married for time and eternity in the Logan Temple on March 12, 1958. He will be remembered for his dedicated service to others, his love for his family, and his faith in Jesus Christ. He served faithfully in many capacities in the Church of Jesus Christ of Latter-day Saints. He could regularly be seen helping others without want for recognition and had a gift for making others feel loved and seen. Dale and Cheryl served missions for the Church of Jesus Christ of Latter-Day Saints in Albania and Virginia, and later served faithfully in the temple for several years. Dale is preceded in death by his parents, Edith and Marvin, as well as siblings, Alice Joyce and Marvin Florin. He is survived by his wife, Cheryl; siblings, Marianne and Helen; and children, Teresa (Randall) Dopp, Kurt (Mindy), Mark (Carla), and Troy (Lisa), as well as 14 grandchildren and 17 (soon to be 18) great-grandchildren. Funeral Services will be February 7, 2020, at the North Logan 1st Ward Building, 1105 East 2100 North, Logan, UT at 12:00 noon, with a viewing from 10:00-11:30, just prior to the funeral services. Condolences and memories may be shared with the family online at www.allenmortuaries.net

The family of Dale Eugene Fullmer created this Life Tributes page to make it easy to share your memories.

Send flowers to the Fullmer family.