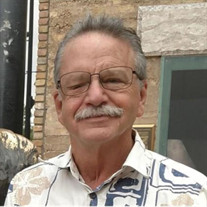 Daniel Allen Martin, 65- Grandpa, Father, Husband, and flashlight connoisseur, passed away peacefully at home on August 8, 2021. Dan started life in Kansas City, Mo, on August 11, 1955. He then moved to the Pheonix, AZ area, where he lived with his grandmother, whom he called Mom. Dan later moved to Utah with his parents, where he graduated from Lehi High School. Dan joined the US Marine Corps, where he worked as a sharpshooter and Crew Chief for Amphibious Landing Vehicles. He was proud to have served his Country. Dan spent his working years employed at ATK Thiokol, trucking for Ray Bethers in SLC, and later a federal employee at ATK, then Raytheon in Tucson, AZ. Dan married Lori Mathews on May 22, 1976. Dan and Lori enjoyed motorcycle trips on the Harley and many other fun vacations together. Dan and Lori welcomed three kids into their crew and later rolled out the red carpet for nine grandkids and two great-grandkids (with one on the way). Dan and Lori were the happiest when spending time with their kids, grandkids, and great-grandkids. Dan is survived by his wife Lori, daughters Tori (Rob) and Lexy (Chris), son Tyrel (Missy), grandkids Sherice (Ryan), Natty (Alex), Gabby (Colton), Brianna, Haiden, Jack, Annie, Riley and Easton, great-grandkids Louie and Milo, sisters Bev (Aaron), Mona (Steve), Judy (Greg) and Jane (Scott), and many nieces and nephews. Dan was preceded in death by his grandparents, parents, parents-in-law, brother Randy and sisters JoAnn and Nola. All are welcome at a remembrance luncheon on Saturday, August 14, 2021. The luncheon will be held at Mathews Campground in Blacksmith Fork Canyon at 11:00 am (41*37’51.4″ N 111*42’25.4″ W, 7 miles east of Hyrum Mcdonalds). Visiting will continue until 3:00 pm. In lieu of flowers, make a memory with your loved ones. Tell us what you did at [email protected] or drop us a note. Arrangements by Allen-Hall Mortuary www.allenmortuaries.com

Daniel Allen Martin, 65- Grandpa, Father, Husband, and flashlight connoisseur, passed away peacefully at home on August 8, 2021. Dan started life in Kansas City, Mo, on August 11, 1955. He then moved to the Pheonix, AZ area, where he lived... View Obituary & Service Information

The family of Daniel Allen Martin created this Life Tributes page to make it easy to share your memories.

Send flowers to the Martin family.