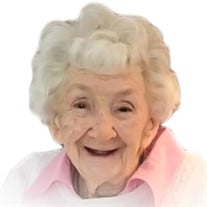 Darlene Perkes Read passed away September 26, 2020 in Hyde Park, Utah. She was born in Hyde Park, Utah January 30, 1930, the second daughter of Leo and Ordis Perkes. Darlene spent her youth in Hyde Park working on the family farm hoeing beets, picking strawberries and playing fast pitch softball. Mom was a very hard worker but always found time to play ball. Mom said she was never a good batter but her long arms and legs made her the perfect first baseman. She played many years on the Hyde Park softball team as well as many other teams. Darlene graduated from North Cache High School. She met her husband Dale Read while playing fast pitch softball. Dale and Darlene were married in the Logan Temple on April 26, 1951 thus beginning their lives together on the Read family farm in Smithfield, Utah. Summers would find her working along side her children picking beans for Del Monte or hoeing beets for the fall harvest. She knew the value of good honest work. Mom was an active member of the Smithfield First Ward until age and illness prevented her from attending. She held many callings in the Church of Jesus Christ of Latter Day Saints including teaching the sunbeams for over 10 years. She also coached many softball teams. Darlene always grew a large vegetable garden and shared her produce with many family, neighbors and friends. She was known for growing sweet potatoes, black raspberries, dewberries and other unusual produce which she willing shared. Along with her vegetable garden she grew countless flowers for which she was known. Her thousands of tulips bloomed every year along the pasture sidewalk and her drive-way. She was preceded in death by her husband Dale, her oldest daughter De Ann, her oldest son, Michael and his wife Debbie, two grand-sons Zachary and Benjamin. She is survived by her other children Susan (Scott) Dayley of Logan, youngest daughter Vicki Read, youngest son Robert (Liza) Read, both of Smithfield, ten grand-children and three great-grandchildren. A viewing and funeral will be held October 1, 2020. The viewing will be from 10:30 a.m. until 11:30 a.m. The funeral will follow at noon. Both events will be at the Smithfield First Ward Chapel located at 175 South 100 West Smithfield, Utah. The family would like to thank Autumn Care, countless neighbors and friends who helped her through the last few months of her life. Interment will be in the family plot in Smithfield, Utah. The family asks that people attending services and the viewing please wear masks and practice social distancing.

The family of Darlene Perkes Read created this Life Tributes page to make it easy to share your memories.

Send flowers to the Read family.