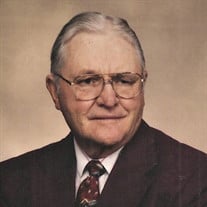 To view graveside services please click on the following link: https://us02web.zoom.us/rec/share/4fVHHqHX5ExOZIXqr3P2VoszDKLKaaa8gCdM-qBbyRwRiFhqlbcTPWgmPgCybDgS?startTime=1595696519000 Dasil George Mathews passed away peacefully on July 16, 2020, at his home in Las Vegas, Nevada. Dasil was born January 2, 1920 in Antimony (formerly Coyote), Utah, the third child of Benjamin Lynn and Esther Black Mathews. He attended Paiute High School in Circleville, UT for three years. He spent his senior year of high school at Branch Agricultural College (BAC) in Cedar City, UT, where he participated in football, basketball and track. After graduation, he continued to attend BAC for college. With the start of World War II, he became an air traffic controller at the Naval Air Station in Oakland, CA, and later joined the United States Merchant Marine. After undergoing basic training, he was assigned to the South Pacific, where his ship hauled troops to and from battle zones. After returning to the US, he began officers’ training at Kings Point, NY. When the war ended he was discharged, and returned to Utah to attend Utah State University (USU). While at USU, he met the love of his life, Kathleen (Kathy) Stanton. They were married June 12, 1946 in the Idaho Falls Temple. After graduation from USU, Dasil and Kathy moved to California where teaching jobs took them to several small towns in central California. During this time, Dasil received a master’s degree in education from the University of California, Berkeley. With this degree, he moved from teaching to administration, eventually becoming principal of Armijo High School and Director of Secondary Education in Fairfield, California. Upon retirement, he and Kathy moved to a small orchard in Vacaville, California, where he was able to meet his lifetime goal of becoming a small farmer. Life was good until Kathy suffered a stroke. They moved to Las Vegas in 2004 when it became too difficult to maintain the house and acreage in Vacaville. Kathy passed away in December of 2004. Dasil was a life-long member of The Church of Jesus Christ of Latter-day Saints and served in many church callings, including Bishop. He and Kathy also served a 12-month mission in Ohio and Indiana. After Kathy’s passing, Dasil worked in the Las Vegas Temple two days a week for over ten years. He was 95 years old when he was released due to health issues. Dasil was preceded in death by his dear wife Kathy, two daughters, Jennifer Mathews and Kathleen Mathews, his brothers Gerald, Alton, Wendell, Kay, Paul, and Stanford, and his sisters Naomi, Celia, LaRae and Pauline. He is survived by his sons Alan (Brenda) of Centerville, Utah, Robert (Susie) of Salt Lake City, Utah, and Michael (Dana) of Las Vegas, Nevada, twelve grandchildren and twenty-eight great-grandchildren. Due to COVID-19 concerns, there will be no funeral service. A private Graveside Service for family will be held Saturday, July 25, 2020, beginning at 11:00 am at the Hyrum City Cemetery in Hyrum, Utah. A viewing will be held at Allen-Hall Mortuary, 34 East Center in Logan, Utah from 9:30 to 10:30 am prior to Graveside Services. In lieu of flowers, the family recommends donation to the American Diabetes Association, or to the LDS Humanitarian fund. Condolences may be expressed online at www.allenmortuaries.net

The family of Dasil George Mathews created this Life Tributes page to make it easy to share your memories.

To view graveside services please click on the following link:

Send flowers to the Mathews family.