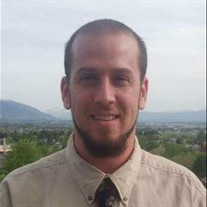 On Thursday January 14, 2021, David Charles Lagasse, loving husband and father, passed away at the age of 39. David was born on March 7, 1981 in Logan, Utah, the third child to Arlin Lagasse and Sharon Jarrett (Sawyer). He met his wife Lindsay when he was 19 and she was 15 and they developed a cherished friendship for several years before dating. They were later married on September 25, 2004 and settled in Logan to build their life together. They had two daughters, Kenzy and Ashlyn and he was so happy to have three girls in his life to spoil and love. David enjoyed music, camping and good company. He collected tools and more tools and any trinket he thought would come in useful. He had a love of the outdoors and frequently found solace in the beautiful canyons of Cache Valley. David loved skateboarding and bike sports as a teen and as an adult had graduated to 4 wheelers and motorcycles, the faster the better. David was employed by Gossner Foods for nearly 13 years where he most recently held the position of Receiving Manager. He was best known for his car work but could do any task that he put his mind to, and could do it better than anyone. He enjoyed helping friends, family and neighbors with any project they had and everyone came to know and trust his abilities. He was determined to be the best and wanted the best for anyone he loved. David had such a big heart. He was the person who turned over pennies on the ground and left them face up for someone else to collect the good luck. He was the person who was always willing to offer his advice to anyone struggling and loved having intellectual conversation with friends and family. He gave the best and most heartfelt hugs that will be terribly missed by his loved ones. David is survived by his wife Lindsay, his daughters Kenzy and Ashlyn, his parents Arlin Lagasse and Sharon Jarrett, his siblings Sharlene, Raymond, Jared, Sheri and Nathan, as well as many nieces and nephews that loved and adored their uncle David. His wife would like to offer a special thank you to his army of friends that have shown so much love and concern during this time. He loved you all. A viewing will be held at Allen-Hall Mortuary in Logan on Thursday, January 21 from 6:00-8:00 pm. Funeral services will be held Friday, January 22 at 11 am at the mortuary. Funeral services will be live streamed and may be viewed via the following link: https://us02web.zoom.us/j/81599126576?pwd=eUd5ZnRRZ2dWenJZRDZDdlJIY2dqdz09 Password: David In lieu of flowers, if you would like to contribute, please give to the David Lagasse Memorial Fund on GoFundMe (click below link) or donate on Venmo @david-lagasse-memorialfund https://www.gofundme.com/f/david-lagasse-memorial-fund?utm_medium=copy_link&utm_source=customer&utm_campaign=p_lico+share-sheet

On Thursday January 14, 2021, David Charles Lagasse, loving husband and father, passed away at the age of 39. David was born on March 7, 1981 in Logan, Utah, the third child to Arlin Lagasse and Sharon Jarrett (Sawyer). He met his wife Lindsay... View Obituary & Service Information

Send flowers to the Lagasse family.