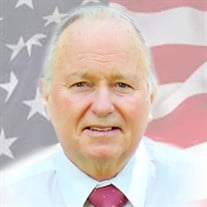 Dee Irving Coulam passed peacefully from this life July 8, 2021. Born in Driggs Idaho, September 20, 1942, Dee was the oldest child born to Henry Irving Coulam and Myra Butler Coulam Balls. Dee spent the early years of his life at the base of the Tetons growing up on the family farms raising cows, horses, chickens and mischief. Due to his father serving in World War II, Dee didn’t get to meet his father until he was two years old. He began saluting every man in uniform he saw because he thought it might be his father. When Dee was four years old, his family moved to Germany for two years where his father was stationed as part of the occupation forces. After his father was discharged from the military in 1954 his family settled in Hyrum, Utah making their living raising chickens, selling eggs and later Christmas trees. Dee graduated in 1960 from South Cache High school where he was involved in football, wrestling, and track. He loved music, building things, cars, the outdoors, hunting and fishing. He served a mission for the Church of Jesus Christ of Latter-Day Saints from 1961-62 in the German South mission. Upon his return, he attended two years of college at Utah State University before being drafted into the Army. He completed officer candidate school and served as 1st Lieutenant, Airborne Division, also in Germany. Upon discharge from military service, he returned to Hyrum where he continued his love of building by entering the construction trade and built homes throughout Cache Valley. He sang in Delta Fi Chorus with the LDS Institute. He met his wife, Lynn, on a blind date set up by Lillian Felton and future Mother-in-law, Rose Blana, in 1970. They were married and sealed in the Logan Temple, May 25th 1972. They chose to live in Hyrum where he built their own home and raised their family. His career continued in construction where he was promoted to the position of superintendent. He worked in construction until he was injured and switched careers, working for IHC in construction and delivering home health supplies. After retirement he spent time growing, harvesting and selling yummy produce from his garden, helping his family, teaching his grandkids skills around the house and traveling to rock shows where he demonstrated his talents by faceting gemstones. Dee is remembered as a collector of treasures, tools, rocks, useful bits and stories. His memory can be honored by being kind to others, leaving things “better than you found them” and serving God, Family, and Country. Dee is survived by his wife of 49 years Vera Lynn, daughter Michelle (Drew) Wilson, sons, Steven (Heidi) and Paul, 6 grandchildren (Colby, M’Kenzie, Wyatt, Jaxson, Morgan and Averie), sister Cheryl Holmes and brothers William (Vika) and Jon (Kathy). He is preceded in death by his parents. Funeral services are under the direction of Allen-Hall Mortuary. A viewing will be held Tuesday evening, July 13th from 6 to 8 pm at Allen-Hall Mortuary, 34 East Center Street in Logan. Funeral services will be held Wednesday, July 14th, beginning at 12pm at the Hyrum North Stake Center chapel, 245 Apple Drive in Hyrum, with a viewing prior beginning at 10:30am. Interment will take place in the Hyrum City Cemetery. Funeral services will be livestreamed and may be viewed via the following link: https://us02web.zoom.us/j/89143436507?pwd=L0hoT3I4ODhvWEE1MVg1ZjFRRm1TZz09 Password: Coulam

Send flowers to the Coulam family.