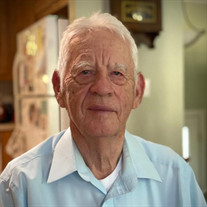 Delbert Lowe Long, age 78 of Nibley Utah, departed this life for a better one October 20, 2021. Delbert Long was born May 1, 1943 in Forest Grove, Oregon. As a child he grew up surrounded by many cousins in Tophill, Oregon. He attended Scofield 1 room school, and later went on to graduate from Hillsboro High. Delbert attended Pacific University before enlisting in the US Navy. He served in the Pacific Fleet as a radio man aboard the USS Shelton and volunteered to serve in the Vietnam War. Being a Veteran was the pride of his life. Delbert married Janet Bolin in the Idaho Falls temple in 1967. They celebrated their 50th Anniversary in 2017. Delbert was employed in the grocery business for 40 years; 20 years as a store manager and 20 as a grocery sales rep. After he retired, he took great joy in driving the school bus in Scappoose Oregon where he resided most of his married life. Delbert and Janet moved to Nibley, Utah, in 2017. Delbert was a faithful member of The Church of Jesus Christ of Latter Day Saints his whole life. He and Janet served a mission for the church in the Great Kentucky Louisville mission, residing in Robinson Illinois. He also served in the Portland Temple baptistery for 14 years. Delbert loved his family more than anything. He enjoyed camping and the outdoors. He loved playing games, teasing and making friends with everyone he met. Delbert loved college sports, especially the Oregon Ducks. He loved working with wood and built many beautiful things. He was a poet and an author. He published his first book just 2 years ago, “Miracles in Golden Valley”. Delbert is survived by his wife of 54 years, Janet, of Nibley Utah. His daughter Brenda Ulrich (Adam) of Auburn Washington. Julie Gortler (Kevin) of Logan Utah. Timothy Long (Shannon) of Scappoose Oregon. Wendy Carlsen (Calvin), of Moreno Valley California. Anthony “Tony” Long (Teresa) of Lakewood Washington. Anita Moar (Michael) of Nibley Utah. He has 23 grandchildren and one great grandson, Arthur who he adored and called him “Buppa Duck”, and one more on the way. Sister Reva Marchant of Nibley Utah, Melvin Long of Conroe Texas, Jeannie Parkin of Hillsboro Oregon, Wilma Minor of Klamath Falls Oregon, Howard Long of Payette Idaho and Harold Long of Cherry Grove Oregon. He was proceeded in death by his parents Isaac Charles and Margaret Long, a sister Glenda Marchant and brother Raymond Long. Funeral services will take place Wednesday, October 27 beginning at 12pm in the Nibley 2nd Ward Chapel, 130 West 2600 South. Interment will follow in the Millville City Cemetery. Services will be livestreamed and may be viewed via the following link: https://us02web.zoom.us/j/86088928675?pwd=SU1jUVBhTXNMcGJMbTdYVFo5SFk0UT09 Password: Delbert

Delbert Lowe Long, age 78 of Nibley Utah, departed this life for a better one October 20, 2021. Delbert Long was born May 1, 1943 in Forest Grove, Oregon. As a child he grew up surrounded by many cousins in Tophill, Oregon. He attended Scofield... View Obituary & Service Information

Send flowers to the Long family.