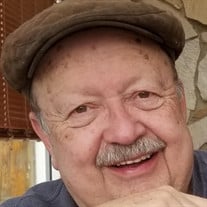 Dennis Norman Clark passed away at the McKay-Dee Hospital from a massive stroke on Christmas Eve December 24, 2021. Born to Francis and Florence Ralston Clark on August 22, 1946 in Bradford, Pennsylvania. Dennis was raised on a small farm where his father raised ducks and chickens. The family moved from Pennsylvania to Florida in the late 50’s where Dennis enjoyed fishing and hunting. In the early 60’s the family moved to Logan, Utah. He graduated from Logan High School in 1964 and Utah State University majoring in History in 1969. Dennis had almost a photographic mind on American and Military History. He would spend hours talking to anyone regarding our country’s history. He married Darla D. Merrill on November 2, 1974 in Logan Temple. They were happily married 47 years. Dennis loved firearms, black powder guns, and military weapons including his favorite cannon. He was one of the most knowledgeable gun experts in the west and would entertain calls from throughout the area asking for his help. He was an expert gunsmith and could fix any firearm and if he couldn’t find the parts, he would make the parts himself. Ask him a question on any firearm and he would provide incredible details on the firearm. Dennis collected 100’s of military and different unusual guns. He had a gun collection that was second to none. Dennis was a great story-teller and teaser but you were never sure his stories were real or not but they were always great to hear. Many of his stories dealt with the American West. He had a full life and enjoyed his 75 years. He and his friends loved to travel the west and find little known towns, historical sites to find treasures. Dennis loved the Trader’s Den’s gun and pawn shop. Once again, he was able to talk to everyone about guns and could share some great stories. He was a pawn broker who was very compassionate to those that needed help during difficult times in their lives. The clients loved to talk to Dennis at the Trader’s Den. Dennis would spend hours every day watching the old-time western movies. He knew most by heart and details on the actors. One of Dennis’ cousin said “Dennis enjoyed life and lived to his fullest and was always happy.” Another cousin said “When you met Dennis, you would never forget him.” A friend and former employee, Kerry contributes his success in business today because of Dennis Clark. “He taught me how to sell and be honest in my dealings. Dennis was a great example.” Kerry now owns one of the most successful gun stores in Texas and the country. Dennis was preceded in death by his parents, Francis and Florence Clark and his brother Lee Clark. He is survived by his wife Darla D. Clark, his brother-in-law G. Gregory Merrill & wife Joan, nieces and nephews Stefanie and Matthew Hansen (children Abby & Tessa), Stanton and Michelle Merrill (children Mason, Aidan, Ethan, Gavin & Ellie), Chad and Chelsea Merrill (children Mckenzi and Alexi), Jessica Merrill (child Kalia), sister-in-law Joy Clark (nieces Cindy and Debbie) and his beloved Yorkie dog Tillie who sits on top of his recliner chair waiting for him to return. Funeral Services will be held at 12pm Thursday, December 30th at Allen-Hall Mortuary, 34 East Center Street in Logan. A viewing will be held Wednesday, December 29th from 5 to 7pm at Allen-Hall Mortuary and 10:30am prior to the funeral. Graveside services will be at the Logan City Cemetery. Services will be live streamed and may be viewed online via the following link: https://us02web.zoom.us/j/82383077221?pwd=SEFOWXRtZjVoaVRyQkZXUzliSjhrdz09 Password: Clark

Dennis Norman Clark passed away at the McKay-Dee Hospital from a massive stroke on Christmas Eve December 24, 2021. Born to Francis and Florence Ralston Clark on August 22, 1946 in Bradford, Pennsylvania. Dennis was raised on a small farm... View Obituary & Service Information

Services may be viewed here: https://us02web.zoom.us/j/82383077221?pwd=SEFOWXRtZjVoaVRyQkZXUzliSjhrdz09

Dennis Norman Clark passed away at the McKay-Dee Hospital from...

Send flowers to the Clark family.