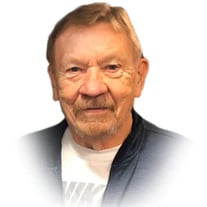 Our loving dad, brother, grandpa & friend passed away peacefully at his home on July 22 with his sweetie pie by his side. He was born in Logan, Utah on March 27, 1944 to Bettye and Ray Doling. He graduated Ogden High School in 1962. He started working at an early age at Safeway, then as a medic at Job Corp for several years all while serving in the Military Reserve for 28 years then retiring as a jet mechanic at HAFB in 2017. He married Charlene Renfrow in 1966 and had two children, Brett & Stefanie. He later married Bonnie Hill and together they welcomed his third child Brooke. His passion in life was creating his own sanctuary at his home in Layton, Utah for the past 36 years. He welcomed many homeless cats (and a few racoons). He nursed them back to health if needed, and provided a safe, loving home for them. They all knew they could count on Dennis for not only food but unconditional love. It brought him great joy to have them. He was a gentle soul, always caring for others. He had a quiet, yet witty sense of humor. He loved listening to Jazz music and fulfilling his dream of restoring his 1974 Dodge Charger. He was a member of the LDS faith. He had a deep spiritual side and the desire to know his Heavenly Father, as well as his purpose here on earth. He is preceded in death by his mother and father. He is survived by his children Dennis B. Doling of Layton, Utah, daughter Stefanie Doling of Reno, NV, daughter Brooke Wiberg (Joshua) of Logan, Utah, sisters Nancy Butler of Fresno, CA, Tracy Munson of SLC, brother JC Hansen of SLC, Utah, and Becky Webster (Dave) of Toole, Utah, along with two grandchildren Izabel & Dylan. Services will bring him full circle, back to where his life began in Logan Utah. A viewing will be held July 30, 2021 at 9 a.m. at Allen Hall Mortuary 34 E. Center St. followed by graveside services at 10 a.m. at the Hyde Park Cemetery 400 East Center street in Hyde park. In Lieu of flowers, Dennis would love nothing more than a donation to C.A.W.S. Pet Sanctuary @caws.org 1-(801) 325-4731. Services under the direction of Allen Mortuary.

Our loving dad, brother, grandpa & friend passed away peacefully at his home on July 22 with his sweetie pie by his side. He was born in Logan, Utah on March 27, 1944 to Bettye and Ray Doling. He graduated Ogden High School in 1962. He started... View Obituary & Service Information

The family of Dennis Ray Doling created this Life Tributes page to make it easy to share your memories.

Send flowers to the Doling family.