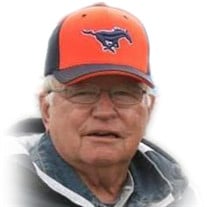 Dennis Earl Hansen passed away on Thursday June 13, 2019 in Logan Utah. Dennis was born in Brigham City, Utah on May 16, 1940 to Earl Varnick and Iva Lue Hansen. He was one of 4 children being the only boy. Preceded in death by his oldest sister, Eileen Vandehei Survived by his two younger sisters Loraine Foxley and Becky Reagan. While growing up in Brigham City Utah he participated in several activities. After graduating from Box Elder High School in 1958 he entered the Army reserve in March of 1959 for 6 months upon being released in April 1956. Once he returned home he started at Snow College on September 8, 1959 where he was an JUCO All American and participated in the East West game in Albuquerque New Mexico in November of 1960. During this time he met his wife of 56 years, Cuma Hansen. Dennis left to serve an LDS Mission in Sweden on July 4, 1960 returning home January 5, 1963. Once he returned home he married his college sweetheart, Cuma H. Hansen, from Mayfield, Utah in the Manti Temple February 15, 1963. Dennis and Cuma continued their journey at Utah State University where he graduated with a teaching degree in History and had 2 children, Christine (Eugene) Nelson and Shairstein (Lynn) Garner. He started his career in education and as a football coach in Rigby Idaho. From there he moved his family to Nephi Utah to continue coaching for 8 years adding 4 more children, Stephen (Jill) Hansen, Susanne Hansen, Brett Hansen (preceded in death) and Denise (Carl) Ramsay. In 1975, he once again followed his passion for coaching and moved to Rupert Idaho returning to Midvale Utah in 1976 where he would raise his family and continue his career in education at Hillcrest High School. Dennis served many roles in education as a Coach, Teacher and eventually retiring from education as a Principal from Hillcrest High School in the Jordan School district and moving with his wife to Avon Utah where they spent 20 years enjoying each other. He loved wood working, four wheeling, and going to Utah State University games with family. While serving others, he always put his family first. His family is what he was most proud of. He made sure to keep his family close by taking them camping, boating and fishing. He was at every event any of his children and grandchildren participated in, making sure not to miss any of them. He loved Christmas and our yearly meeting with Santa Claus. While he will be greatly missed, these traditions will continue to be done with the love of family that he cherished so much. Dennis loved his children and adored his grandchildren Staci Nelson, Daney Nelson , Brady Garner, Shailyn Garner, BrandiJo (Justin) Hemmert, Sadie Garner, Trace (Brittany) Hansen, Jori (Spencer) Coombs and Kalle Ramsay. He was also able to show his love to his great grandchildren Annabelle Nelson, JayceLee Hemmert, Kashton Hemmert and Schofield Coombs. Funeral services will be held on Tuesday June 18 at the Paradise 1st Ward Meeting House 155 East 9400 South Paradise Utah. Viewing will be held from 11:00-12:30 with funeral following at 1:00 with graveside services following in Avon Utah.

Dennis Earl Hansen passed away on Thursday June 13, 2019 in Logan Utah. Dennis was born in Brigham City, Utah on May 16, 1940 to Earl Varnick and Iva Lue Hansen. He was one of 4 children being the only boy. Preceded in death by his oldest... View Obituary & Service Information

The family of Dennis Earl Hansen created this Life Tributes page to make it easy to share your memories.