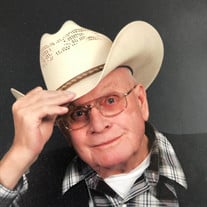 Dennis Kay Murray of Wellsville Utah died Thursday February 27, 2020 in Logan, Utah. He died from complications of Pulmonary Fibrosis he battled for the last 2 years. Born on the 10th of November 1948 to Heber Kay & Mardene Murray. Dennis grew up and resided in Wellsville, Utah his entire life. He and his father ran the Family Dairy for many years. Dennis also worked construction and drove semi's until he started his own trucking business "Murray Transport". He and his son drove many miles and met and gained many lifelong friends. After the passing of his son, Robert, in 2017 due to a heart attack he was left with a void in his life that he struggled with until his death. Dennis had a witty sense of humor and enjoyed laughing, visiting with friends and family. He enjoyed spending summers at his property in Blacksmith Fork Canyon riding his side by side, and later in life he and Joan spending winters in Littlefield, AZ. Dennis was very proud of his children and grandchildren and enjoyed spending time with them at the kitchen table, discussing life, reminiscing, sharing stories and giving advice. (Even when not wanted). He leaves a lot of memories with the ones he loved that will be cherished. Dennis Leaves behind his wife, Joan Francis Murray, Daughter Danette Robbins (Coty), Daughter-in law Tanya McKennon. Five granddaughters Natosha (Sheldon) Fleurant, Mariah (Terell) Butler, Makayla (Casey) Clawson, Shealey (Dillon) Hatch and Maddie Robbins, also two great-grandsons Hayden and Wesley Fleurant. Three sisters Marilyn (Thayle Deceased) Eliason, JoAnn (Dwight) Kirby, Sharon (Phillip) Paro. Along with many nieces and nephews. He was proceeded in death by his parents Heber Kay & Mardene Murray, Son Robert Dennis Murray and sister in law Ann Marx. Viewing will be Tuesday March 3, 2020 from 10:00- 11:45 AM at Allen Hall Mortuary 34 East Center, Logan, Utah. As requested by my father no funeral will be held. Burial will be at Wellsville Cemetery 400 N 200 E. Wellsville, Utah.

The family of Dennis Kay Murray created this Life Tributes page to make it easy to share your memories.

Send flowers to the Murray family.