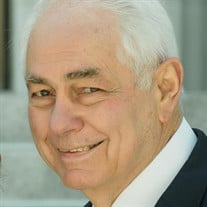 On Wednesday, February 17, 2021, Dennis Lang Rhoton (81) of River Heights, Utah, passed away peacefully at home surrounded by family. Dennis was born on May 12, 1939 in Prescott, Arizona to Newel F and Frances Heloise (Mileham) Rhoton. He received his Bachelor of Arts in Business Administration from Northern Arizona University and became a very successful insurance agent throughout Arizona, Utah, and Idaho. On 21 December 1962 he married Joan Evonne Clark in the Mesa Arizona Temple and together they had seven beautiful children, Barbie (Sparrow), Darren, Sherry (Cierra Jae), Michael, Marcus, Pamela (Nix), and Kenneth. On October 17, 2002 he married Dianne W. Smith in the Salt Lake Temple for time. Dennis loved his family, including Dianne’s children and grandchildren and felt a strong connection as well to his Native American ancestry through the Citizen Band Potawatomi Tribe. He had a firm and passionate testimony of the restored Gospel of Jesus Christ and loved to teach of Christ. As a young man he served faithfully as a missionary for The Church of Jesus Christ of Latter Day Saints in the Central States Mission and then as a couple missionary in the Montana Billings Mission (2007-08) with Dianne. During both missions he developed an affinity for his fellow Native Americans, touching the hearts of many. During his younger years he relished opportunities to go hunting and fishing and just being in the outdoors. In his later years he found great joy in feeding and caring for the various birds and wildlife that frequented his backyard and going dancing with his bride. Dennis embodied the values of integrity, service, hard work and devotion to God. Dennis was preceded in death by his parents, Newel and Heloise, his brother John, his sister Sandra (Taylor), and by his son Michael. A small family graveside service will be held on Thursday, February 25. Interment will be in the Providence City Cemetery. Services are being handled by Allen-Hall Mortuary, Logan, Utah. Services will be livestreamed Thursday beginning at 2pm and may be viewed via the following link: https://us02web.zoom.us/j/83739347208?pwd=Sk52MXRoSzlRckwrRm9GSFVjZHowdz09 Password: Rhoton

On Wednesday, February 17, 2021, Dennis Lang Rhoton (81) of River Heights, Utah, passed away peacefully at home surrounded by family. Dennis was born on May 12, 1939 in Prescott, Arizona to Newel F and Frances Heloise (Mileham) Rhoton. He received... View Obituary & Service Information

Send flowers to the Rhoton family.