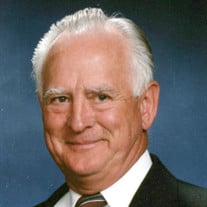 On May 28, 2021, our beloved husband, father, and “Grumpy Grandpa”, Don Earl Larsen, passed away surrounded by his family. Don was born on July 15, 1934, ruining his sister Daisy Del’s birthday party. He was born to Erastus Norman and Daisy Barker Larsen, and he and 5 siblings were raised in Newton, Utah. While dragging Logan’s Main Street with mutual friends, he met the love of his life, Janice Elaine Adams. They were married on October 1, 1953 in Logan, Utah, and were later sealed for time and all eternity in the Logan Temple, September 26, 1979. Don and Janice had three children—Vickie, Doniel, and Kirk. Don began working as a gandy dancer for the railroad, and shortly thereafter trained as a meat cutter which became his lifelong profession. That profession moved Don and Janice to Idaho Falls, Blackfoot, Tremonton, Ogden, and various places, but they ultimately settled in Logan. Don and Janice enjoyed many days water skiing at Twin Lakes with friends and family. During these early years, Don and Janice lost their daughter Vickie in a tragic automobile accident which greatly impacted their lives. Later in life, Don and Janice enjoyed golfing and traveling—especially to Sweden. Don and Janice were avid fans of their grandchildren, and enjoyed supporting them in their various pursuits. Don found great joy in serving in the LDS church as a bishop, counselor in a student ward bishopric, Sunday school president, and many other callings. Janice and Don served two missions, one to the Portland, Oregon Mission and the other in the Detroit, Michigan Mission. During retirement, Don could not sit still. He loved helping his neighbors (especially the widows) by mowing their lawns and shoveling their snow. Don also developed a woodworking hobby and made MANY, MANY birdhouses. After Janice’s passing, Don married his dear friend Nancy Bodrero on August 17, 2013. They enjoyed taking road trips, visiting friends and neighbors, and gardening in their yard. Eventually, Don’s health, strength and memory began to fail and he was moved to Logan’s Legacy House. Janice, Vickie, all his siblings, and his parents proceeded Don’s death, and were there to greet him as he passed on. Don is survived by his wife Nancy Bodrero, his sons Doniel (Lynda) and Kirk (Shauna) Larsen, his stepchildren Michael Bodrero, Lisa (Doug) Ringle, Cheryl (Jason) Rindlisbacher, Jason (Madeline) Bodrero, Eric (Cami) Bodrero, Lance (Megan) Bodrero, and his grandchildren Kenny (Nena) Leatham, Angie Leatham, Adam, Alisa, Jared (Heather), McKay (Tristin), and Erika Larsen, and further posterity. Don’s family would like to thank the many workers at Legacy House and Hospice for keeping Don happy, comfortable, and well-taken care of for the past two years. Funeral arrangements are under the direction of Allen-Hall Mortuary. Viewing and funeral services will be held on Saturday, June 5, 2021, at the Logan 29th Ward building at 792 North 500 East, Logan, Utah. The viewing will be from 10:00 am – 12:00 pm, with funeral services starting at 12:30 pm. Interment will be at the Logan Cemetery.

The family of Don Earl Larsen created this Life Tributes page to make it easy to share your memories.