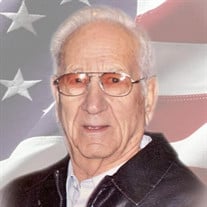 Wellsville-Don Edwin Mitton, age 93, passed away peacefully March 5, 2021 surrounded by his wife of 74 years and his family. Don was born September 23, 1927 in Mt Sterling Utah, to John William Garrett Mitton and Alga Leona Walker Mitton. He was the second son born to Bill and Alga. He grew up in Mt sterling on a dry farm with his sister (Odean) and four brothers (Dee Jay Kay DelRoy). Don attended South Cache High School. He then joined the Merchant Marines in 1945 where he trained on Catalina Island and then sailed in the South Pacific. Upon his return home he married his high school sweetheart Shirley Brown from Hyrum Utah. They were married December 12, 1946 in the Logan LDS Temple. They were happily married for 74 years. Don was the devoted father to five children and their spouses. Shirleen (Dan) Byington, Elko Nevada; Becky (Chris) Poulton, Bothwell Utah; Don (deceased) (Cindy) Mitton, Elko Nevada; Kelly Mitton, Carlin Nevada and Lisa (Marcell) Niederhauser Mendon Utah. He has 15 grandchildren and 37 great children and 10 great great grandchildren who all loved and adored their grandfather and enjoyed spending any time with them they could. Don lived in Twin Falls Idaho for 22 years where he worked for Meadow Gold and had his own Real Estate business. He then moved to West Valley city, Utah, where he went to work for the Sizzler Family Steak House. He lived in WVC for 13 years. He then retired and returned to Mt Sterling where he enjoyed the rest of his life. Don has always been an active member of the Church of Jesus Christ of Latter Day Saints where he has served in many callings. He always enjoyed being part of the ward choir. He has always been a big part of his children and grand childrens lives attending blessings, baptisms, ball games and any over activity they were involved in. They spent many winter months traveling south in their motor home. Don had many interests over the years including fishing, hunting, traveling, whittling, quilting and had a natural talent for music. His main passion was his wife and his family. Don was preceded in death by his parents, William and Alga Mitton, his sister Odean and 3 brothers Dee, Jay, Delroy and his son Don W Mitton. A viewing will be held Friday, March 12th 2021 from 6 to 8 pm at Allen-Hall Mortuary located at 34 E Center Street, Logan Utah Funeral Services will be Saturday, March 13, 2021, at 11:30 a.m. at the LDS Chapel located at 48 W 1450 S Wellsville Utah 84339 with a viewing prior to the service from 10am tp 11am. Interment will take place at the Wellsville City Cemetery. The service will be live streamed and may be viewed via the following link: https://www.youtube.com/channel/UCUo0IS6sE69vpvnqvZah2Vg/videos.

Send flowers to the Mitton family.