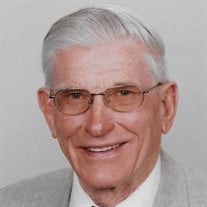 Donald Lee Younker passed away on November 15, 2020 in North Logan, Utah. This was near where he was born at home on March 19, 1927 to Mildred Bell Stroup and Stanley Wayne Younker. Arlene Beck, the farm girl next door became his sweetheart. They married on December 25, 1950 while he was on leave from the navy. Their marriage was later sealed in the Logan Temple. Don was preceded in death by his parents, his older brother Keith and his daughter in-law Diane Younker. He is survived by his wife, Arlene, his sister Ann Page, six children, Gordon (Marie), Norman (Kathy), Douglas (Vicki), Marcene, Angela (Rocky Mackin), Ranell Johnson (Butch), 14 grandchildren and 17 great grandchildren. Don loved the outdoors and his family and has cared for the family farm and orchard all his life. Don’s life, though simple, was exciting: trapper, fisher, hunter, naturalist, explorer, farmer, gardener, plumber, handyman, city councilman, author, welder, scouter, neighbor, apple cider maker, museum curator, missionary, faithful member of the Church of Jesus Christ of Latter-day Saints. He was a proud veteran of World War II and the Korean War where he served in the Navy. As a deck hand on the U.S.S. Pennsylvania, when his skills as a welder were learned, he was assigned to the welding shop. As the Atomic Bomb ended WWII Don’s military service took him to the Bikini Atoll where he witnessed two bomb tests. He said, “I was afraid and would still be running but there was water all around.” As a veteran he was awarded a100 acre homestead in Tulelake, California which he and Arlene successfully operated along with the Church welfare farm in Klamath Falls, Oregon. During the first year of their marriage Don and Arlene lived in a salvaged insulated refrigerator box while Don constructed a home from Quonset buildings from the nearby abandoned Japanese interment camp. They returned to Cache Valley where he worked for the Utah State University Physical Plant for more than 25 years as a plumber, foreman and director of preventive maintenance. He and Arlene were avid Scouters, each receiving the Silver Beaver Award. In retirement Don and Arlene volunteered and led the U.S. Forest Service Logan Ranger District Take Pride in America Campaign to promote the wise use of our public lands. Don was recognized by then Governor Banqueter and in Washington D.C. for exceptional service to the Wasatch-Cache National Forest. As a devoted son he lived next door to and helped his parents nearly every week his entire adult life. His love and example continues as our guiding light for honesty, integrity, humility, and hard work. A memorial service for family members will be held at 12 noon Thursday November 19, 2020 at the LDS chapel on 1600 East and 2600 North, North Logan. This will be followed by interment in the North Logan City Cemetery. Masks and social distancing are required. Funeral arrangements by Allen-Hall Mortuary. Condolences may be sent to www.allenmortuaries.com. Services will be livestreamed, and may be viewed at: https://us02web.zoom.us/j/84742055065?pwd=VTVVa1IwM1hkUGkwQmxPY09WRFFRZz09 Password: Younker

Donald Lee Younker passed away on November 15, 2020 in North Logan, Utah. This was near where he was born at home on March 19, 1927 to Mildred Bell Stroup and Stanley Wayne Younker. Arlene Beck, the farm girl next door became his sweetheart.... View Obituary & Service Information

Send flowers to the Younker family.