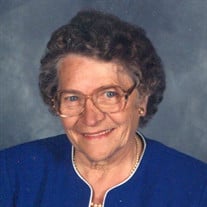 Dorothy Rae Thomas Cowley passed away peacefully on July 21, 2021. She was 94 years old. She was born May 6, 1927, in Sanford, Colorado, to Harry D. Thomas and Bernice Colene Carter Thomas. She attended grade school in Sanford and in nearby Manassa. Her father was a school teacher. In 1940 he was hired to teach high school math at Park City, Utah, so the family moved to Utah. Dorothy completed her first three years of high school in Park City. Then the family moved to Logan. She graduated from Logan High School in 1944. Dorothy attended Utah State Agriculture College (now USU). She attended institute classes and belonged to Lambda Delta Sigma. She graduated in 1948. She met Donald L Cowley in her ward Sunday School class in the fall of 1946. A Thanksgiving football game was their first date. They were married April 2, 1948, in the Logan LDS temple. Dorothy enjoyed being a stay-at-home mom but also had other interests outside the family. She began volunteering at the Ellis School when her oldest son started kindergarten and continued well into her later years. She was active in PTA for 25 years and received the Silver Bowl Award for volunteer service from Governor Scott Matheson in 1981. Dorothy’s church activities were always important to her. She served as a Sunday School teacher, Primary teacher, and Relief society teacher in the LDS Third Ward. She served for 6 years as Relief Society President in the ward and later as a counselor in the Cache West Stake Relief Society. She also enjoyed teaching Relief Society lessons at Williamsburg and substituted at Sunshine Terrace when needed. Dorothy served as an election judge. She served on the library board. She volunteered at Bridgerland Literacy for 10 years. She was always the first to volunteer for fundraising campaigns to benefit children’s charities. Dorothy loved to sing, scrapbook, sew, quilt, and cook. She especially liked baking and made wonderful bread and delicious treats that she would share with friends and neighbors. She was always a people person and enjoyed being with other people old or young. Dorothy was preceded in death by her husband Donald. She is survived by her six children: Douglas of Phoenix, AZ, Dennis (Camille) of Wellsville, UT, Diane (Dave) Stewart of Boise, ID, Donna (Chet) Dahl of Oak Harbor, WA, Darrell (Diana) of Wellsville, UT, and David (Holly) of Wellsville, UT. She is also survived by her sister Mary Wayment and sister-in-law Viola Thomas. Dorothy has 23 grandchildren and 27 great grandchildren. Funeral services will be held on Friday, July 30 at 12 p.m. at Allen-Hall Mortuary, 34 East Center Street, Logan, Utah. There will be a viewing on Thursday from 6:00-8:00 p.m. at Allen-Hall Mortuary and prior to funeral services Friday from 10:30-11:30 a.m. Interment will be in the Logan City Cemetery. Condolences and thoughts may be expressed to the family online at www.allenmortuaries.net. The family would like to offer special thanks to the staff at Terrace Grove for their love and care during Dorothy’s final years. Also, a heart-felt thanks to her neighbors and friends for all the kindness and service they provided to Dorothy. Services will be livestreamed and may be viewed via the following link: https://us02web.zoom.us/j/87474808424?pwd=TEMrbmc0SEVSeWZRWFJHNE5hUWxuQT09 Password: Cowley

Dorothy Rae Thomas Cowley passed away peacefully on July 21, 2021. She was 94 years old. She was born May 6, 1927, in Sanford, Colorado, to Harry D. Thomas and Bernice Colene Carter Thomas. She attended grade school in Sanford and in nearby... View Obituary & Service Information

Send flowers to the Cowley family.