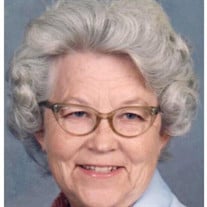 Dorothy Jane Norberg Rothe passed away on April 12, 2021 in Orem, Utah after living a full life. Dorothy was born September 13, 1926 in Coalville, Utah to Lester Marcus Norberg and Marguerite Myrl Bailey. Throughout her life, Dorothy frequently spoke with great fondness for Coalville and her childhood there. Dorothy graduated from Lehi High School and later attended Brigham Young University where she studied nutrition. Dorothy married Dean Rothe on September 2, 1947 in the Salt Lake Temple. After spending a year in New York City, Dorothy and Dean moved to Los Angeles where they spent the next 36 years raising their family before retiring to Providence, Utah in 1984. Dorothy was an excellent seamstress, creating many beautiful pieces of clothing, tapestries, and crafts. She was an avid reader, with passion for crossword puzzles. She could often be found doing more than one puzzle at a time. Dorothy loved to grow things, and would spend hours preserving fruits and vegetables from her garden and orchard. Dorothy’s inquisitive mind lead to her taking many community cooking and USU extension classes. She also enjoyed any and all new gadgets for her kitchen, and in her later years developed an enthusiasm for freeze drying. She was willing to dry anything in her freeze drier, just to see what would happen. Always an active member of the Church of Jesus Christ of Latter-day Saints, Dorothy served in various positions in Primary and Relief Society throughout the years. With her husband, she served two missions to Adelaide, Australia and Munich, Germany. But the service she loved the most was her calling to work in the Logan Temple. For 15 years, Dorothy and her husband faithfully served in the Logan Temple, with Dorothy continuing her service after her husband’s death. Dorothy is preceded in death by her husband, Dean, son, Bruce Rothe, her parents, one brother, Lynn Norberg, and her sisters Carol Pulham and Betty Pulham. She is survived by her children, Sandra (Arlo) Mickelsen, David (Janet) Rothe, Alan (Kathy) Rothe, 12 grandchildren, 23 great-grandchildren, and her sister Janice (Ivern) Pyne. A viewing for Dorothy will be held Saturday, April 24th from 10-11:30 AM, at the Allen-Hall Mortuary, 34 E. Center St., Logan, Utah, followed by a graveside service at 2:00 PM at the Lehi Cemetery, 1100 North 400 East. www.allenmortuaries.com

The family of Dorothy Jane Norberg Rothe created this Life Tributes page to make it easy to share your memories.

Send flowers to the Rothe family.